I did not sleep well. I woke up feeling a little bit dizzy and with a general "sloshiness" in the brainpan. I decided to just chill in the house, letting my head recover, while Andy & Amy went exploring. It was a wise decision.

Another of Andy's friends - Nadine - arrived in the afternoon, and we made plans to go have dinner out, and then see a show in the Red Light District.

Dinner was at a pretty decent Italian restaurant called Il Pacioccone. They made a point of saying "This is not a fake Italian restaurant" on their business cards, website and front door. They definitely pride themselves on the fact that the food, wine, and staff are all Italian. They had a relatively small menu and fairly tasty food, so it was a solid choice to start the evening. 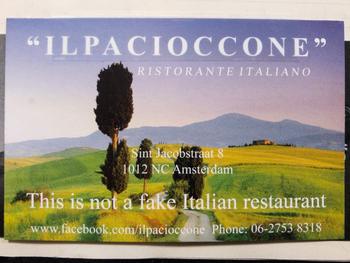 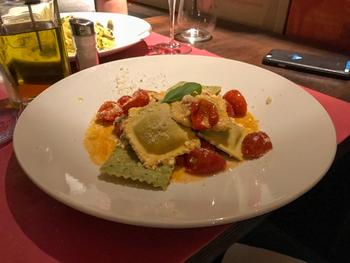 After dinner, we had decided to go to a live sex show. We'd been warned that the experience would not be particularly erotic, and these warnings were accurate. The clubs work on a model of having ~1 hour's worth of acts, continually cycling. You arrive whenever, pay your entry, and after 1 hour you should have seen all the acts (although you're welcome to stay longer, especially if you're buying drinks). We arrived at "Moulin Rouge" right in the middle of a live sex act. Two people, on stage, having sex. It was quite possibly the least erotic situation involving naked people I've ever seen. Neither person was making eye contact with the other - the woman was either staring at the ceiling or had her eyes closed, while the man was staring into the audience, his eyes roaming, and his face somewhere between pleasure and leering. All while an up-tempo Latin beat played, his thrusting largely in time. The weirdest thing (which we didn't work out until the post-mortem discussion) was that neither of them made any noise at all. After a few minutes, the music stopped. He pulled out, they put on robes and walked off. No big finish, no fanfare, just the end of the track.

The other acts were more interesting and had more of a "show" vibe. The banana act - with four audience volunteers, each taking a bit from a banana - was excellent for the sheer volume of embarrassment it spread amongst the volunteers. Sitting near the stage, I got "volunteered" for one of the acts, but all I had to do was blow out a candle, so the embarrassment scope was low. One (un?)lucky guy got called up, made to take his shirt off and had one of the dancers write "HOT BOY" on his chest in permanent marker1, but he got his own back by volunteering a mate for the next act, who got to see just how long the "never-ending ribbon" was.

Once the hour was up, and the live sex couple came back on stage, we made our exit. It was definitely something I'm glad I went to, but it was quite strange, and definitely much bigger on intrigue than it was on titillation.

We rounded out the evening with a proper seedy peep show. "Private" booths, just big enough for 2 people to stand in, arranged in a circle looking in on a round, rotating bed where a performer does a strip tease. Only the glass isn't one-way, so the dancer can see you, and you can also see the faces of the people in the other booths. Definitely more erotic than the sex show, but still probably more intrigue and curiosity for me. I'm not a big fan of seeing other people's leery faces (much like I doubt people are interested in mine). At €2/2 minutes, we didn't stay long before heading home. 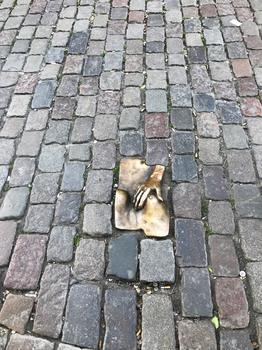