Our flight out of Prague was perfectly timed for a civilised wake-up, relaxed breakfast, and then time to pack before heading out to the airport. We had decided to book a private car back to the airport as well, and ended up with the same driver (but only some of the same stories, since he partially remembered us). 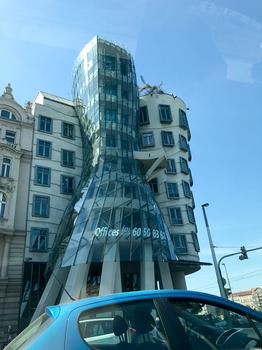 We got to the airport with plenty of time to spare, but unfortunately, our plane didn't - having been delayed earlier in the day by bad weather in Amsterdam1. We boarded the plane and closed the doors about an hour late, only to have the Captain inform us we now had another 30-40 minute delay on the ground in PRG because there wasn't an earlier landing slot in AMS. This caused some consternation from the American guy next to me, who launched into a tirade about how the airline industry needs a global shakeup. Once he cracked his duty-free vodka and poured a generous measure into a cup with some Diet Coke he calmed down a little, but still had plenty of feelpinions to share with the world in general (and occasionally with me in specific). 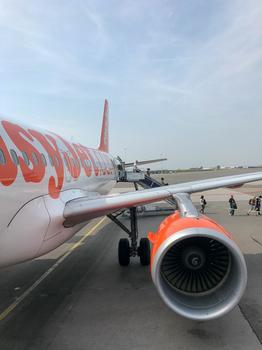 We landed in Amsterdam around 90 minutes late all told, and hand an uneventful journey to our Airbnb near Mercatorplein. I'd done a little bit of research on Amsterdam public transport before arriving, but I needn't have bothered. Getting a train ticket to the city from the airport was trivial, and once in town (we went to Sloterdijk, not all the way into Centraal), the woman behind the counter at the AKO bookstore was very helpful in explaining the whole system2.

We hopped on a bus and then had a short walk to our base in Amsterdam. One of Andy's uni cohort - Amy - was already there, so we settled in an headed out for dinner. 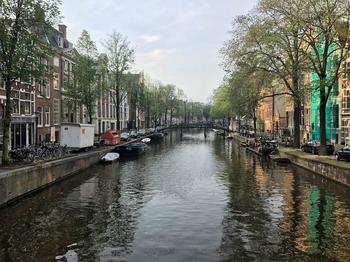 We had no destination in mind, so after getting a tram to Dam Square, I tried the "Google Maps Dinner Plan". We found a small cafe-restaurant - van Kerkwijk - with good reviews, so we walked over. This place doesn't publish a menu, and they change (most of) it every day. After about a "half-a-drink" wait, we were seated and had the menu read out to us. After a very enjoyable sampling of all their entrees, we had our mains, including one of the few things they don't change on the menu: beef with goats cheese and strawberry sauce. This is something that has been on the menu for 18 years, and it's easy to see why. The cheese was a bit too goaty for me personally, but the beef and the sauce were amazing! 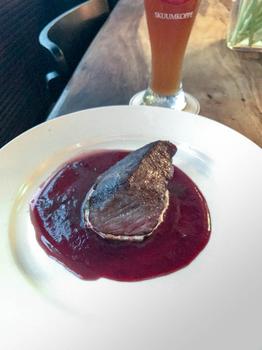 After dinner, we decided to walk through the Red Light District. It's a very interesting experience walking through an area so openly devoted to sex work when in Australia (and most other places I've travelled), it's a subject that's not widely talked about and/or heavily stigmatised. It definitely felt strange to me to be walking down streets and alleys, seeing women in individual windows, waiting for a client to approach, especially since we were gawping3 tourists, not intending to pay for any services. What was nice to see was the diversity in body types, and while there was slightly less diversity in skin tone, but it wasn't a total whitewash. Overall I'd say that the experience was more "interesting" than "titillating" - something that actually became a bit of a theme about the Red Light District on the trip.

Voyeurism sated, we walked back to the tram, headed back to the house and turned in, happy to be back in a queen sized bed in a house, rather than twin beds in a small hotel room.