Even for me, this entry took a while to write. I started this entry in the morning of the 25th, added little snippets here and there on the 26th and 29th, and ended up finishing it in Amsterdam on the 30th. Prague had something in the air that made me not feel like journalling. I fell back to just taking daily notes on my phone, and spent free time typing up old entries and editing photos, rather than writing.

We awoke in our gigantic suite, then had a lazy morning and a generous breakfast at our hotel. At 10:30 we headed to the main square for a free / pay-as-you-like tour of the town. Our guide - Bob - was excellent, just the right mix of humour and information, and clearly knew a lot about the history of Cesky Krumlov. The 2 hour tour took us through the town, to a couple of amazing vantage points (one of which we had discovered the previous night), the church, the castle grounds, and several interesting houses in the old town we certainly would've missed on our own. 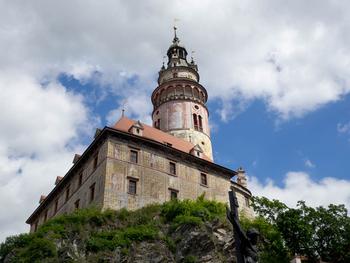 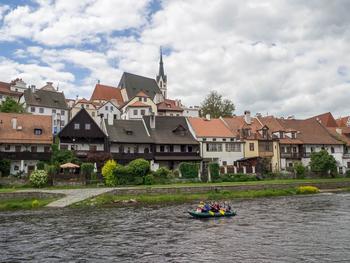 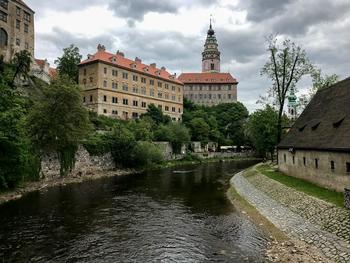 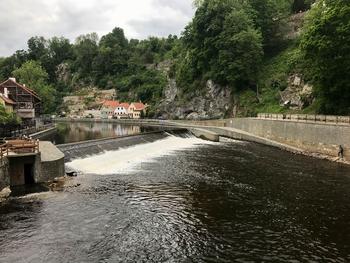 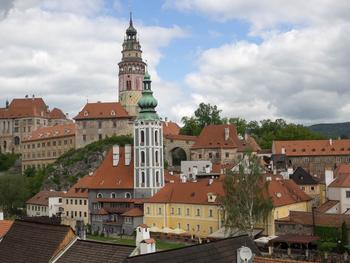 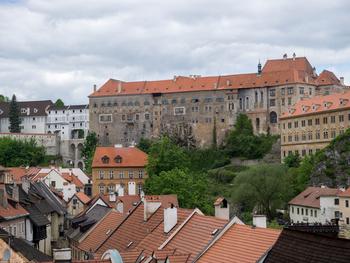 The tour started in the main square and covered a reasonable amount of history about the town. We started with some history of some of the local families that owned the town over the centuries. The Schwarzenberg family coat of arms was an interesting story: the family were vital defenders against the Ottomans in the Habsburg-Ottoman wars, and in the late 16th century their coat of arms had the severed head of a Turk being pecked by a raven. 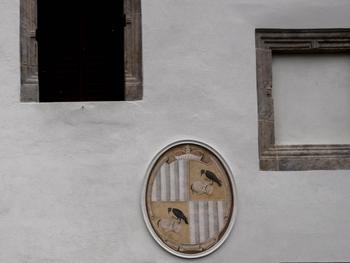 Speaking of family weirdness, we also found that the Rosenberg (Rožmberkové) family, the ones who built the castle, incorporated bears into their coat of arms (as shield bearers) to try to reinforce their claimed relation to the Orsini family - a noble family in Italy. Unfortunately, they extended this to keeping bears in the castle grounds, and the current enclosure is far from sufficient for the bear that we saw there. 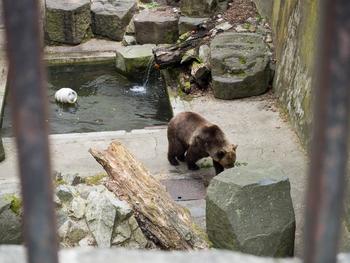 Apart from the bear-keeping, the castle at Cesky Krumlov is quite impressive. The tour took us through all 5 courtyards, and the buildings in the complex have all been restored well, and the views over the town are just as impressive as all the views of the castle from the town. 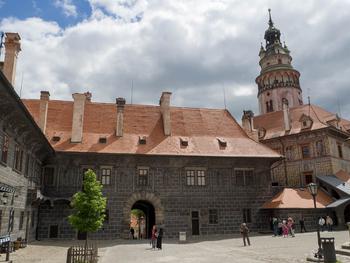 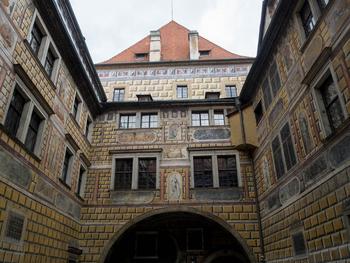 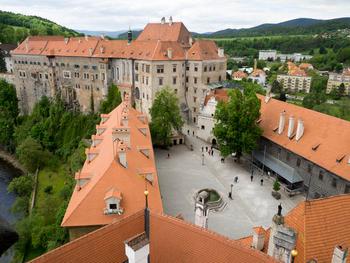 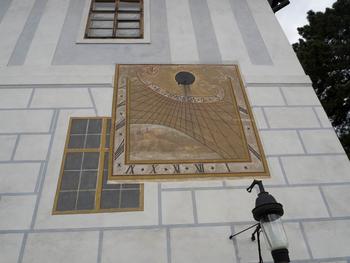 The castle, as well as the town, are a glorious mix of styles. There's the gothic, the renaissance, and the baroque, and in just a few places, the Communist1. In one particularly glorious example (now a pizza shop), all 3 styles can be found in the one building; a gothic ground floor, renaissance first floor and a baroque top floor. 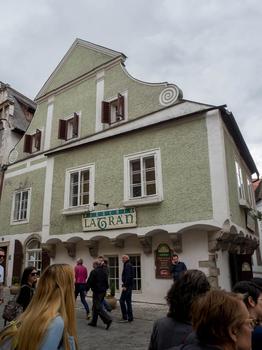 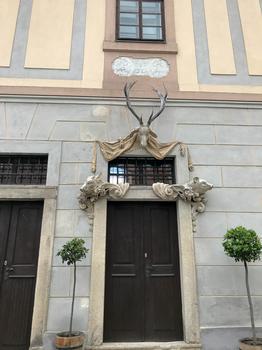 Some other useful tidbits we learned on the tour: 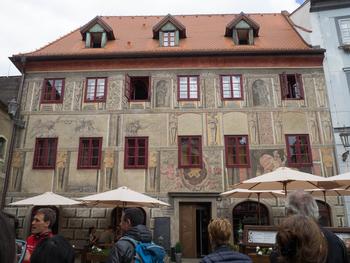 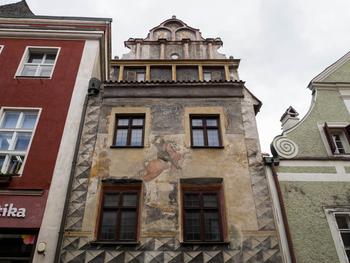 The tour ended in the castle grounds, so anyone wanting to tour the castles could do so. Andy and I decided we didn't really need to see all the interiors, so we just bought a ticket to go up the tower2. The tower itself is not that tall, but since it's at the top of the hill, the views across Cesky Krumlov are pretty great. It's also nice to be fit while doing walking tours and climbing towers. Hard not to be judgy of all the people struggling - well that's not quite true. The judginess happens with the people who reach the top of the tower and celebrate as if they've run a marathon. shrug Oh well, I'm going to hell anyway. 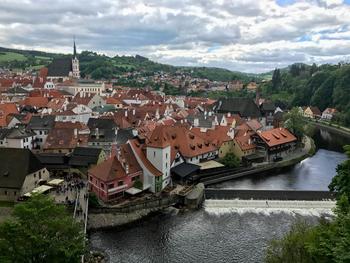 After the tower we decided to go find ourselves some lunch and ended up in a quaint little place called Cikánská Jizba (Gypsy Bar - oops!). It was good (if very salty) food, seemingly cooked and served by one woman. Also the largest, foamiest head I've ever seen on a beer. 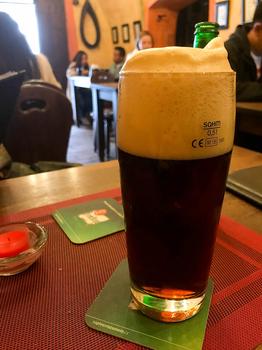 We decided to head to a creperie we'd seen on the tour for dessert, and to just sit and chill for a bit. A mix-up with our order meant we ended up with 3 large crepes instead of 2, so we stuffed ourselves full of sugar and I tried to channel some of the energy into journalling (that's how it works, right?). One of our crepes was sour cherry jam and Nutella, and it was AMAZING. I really wish I knew where to get good sour cherry jam in Australia.

Before the sugar coma set in, we went wandering through the town and doing a bit of window shopping. We bought a couple of little trinkets, but mostly just browsed through various crystal glassware and wooden toys.

Just before picking up our bags for the journey back to Prague we strolled through the (extensive) castle gardens. There we were treated to some of the finest tourists Germany has to offer: a large group of men wearing lederhosen, one of whom appeared to be very excited about the fact that the group was walking, since he shouted "AUF GEHT'S" at every opportunity. 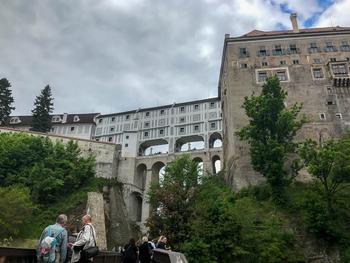 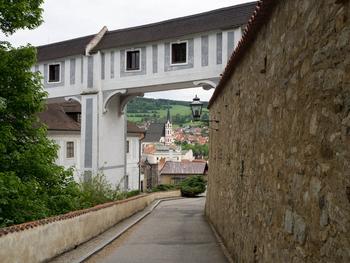 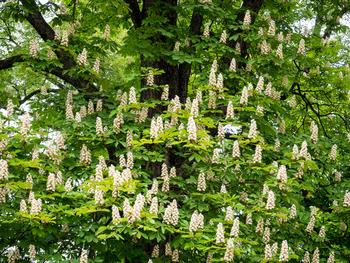 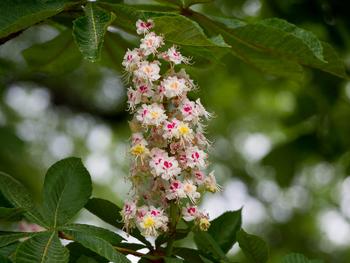 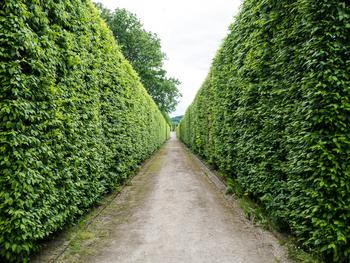 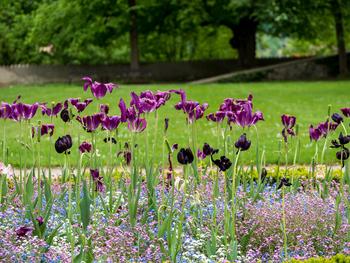 After a short walk through the gardens, we went to pick up our bags from the hotel and head to the bus stop. Pro tip: wheeling suitcases over 800m of cobblestones is not entirely pleasant. It also shows which suitcases have good quality wheels (mine), and which do not (Andy's).

We boarded our fanceh bus, and both napped our way back to Prague, but not before indulging in some deliciously terrible chocolate bars.

In Prague we decided to take the metro to our hotel, but since it was after 21:00, all of the info booths were shut and we had to use the vending machines. Good: they had an "English" button. Bad: they only take coins. What manner of fuckery is this, where one must exchange pressed disks of metal in order to receive goods and services?!? Thankfully we had (accidentally) accumulated enough coinage to buy ourselves tickets, and even managed to buy the required ticket for one of our suitcases. One suitcase had to fare-evade, but it didn't get caught (and at 21:00 the Metro wasn't exactly crowded) so that's ok.

After checking in and dropping our bags, we decided that we would much prefer a fresh supermarket dinner than going to a restaurant, so we ventured out to find a supermarket that was open. We found "Albert" in the concourse of a Metro station. It's somewhat comforting to discover that Metro stations open late at night have a similar … aroma, no matter the country. After a small amount of supermarket snooping (abbreviated due to lateness and hunger), we picked up some ready-made salad, fruit, veg and beer, then walked back to the hotel room to watch MasterChef and crash.