This is the second part of what I wrote up on Boxing Day 2014 - Christmas Eve and Christmas Day.

Christmas Eve in New York provided exactly the weather we didn't want. Cold but not freezing, dark overcast skies, and constant light rain not fun enough to be a good hot-chocolate-and-movie rain, and too heavy to just ignore. We realised that if we wanted to see Macy's in full Christmas swing, this was our only day for it, so we braved the weather and headed to Herald Square to venture into one of the most famous department stores on one of the worst shopping days of the holidays1.

For the most part, Macy's was actually not too bad in terms of crowds. We managed to have a look at the actual goods we wanted, and I bought my replacement runners, ensuring that my old runners can be left in the USA2. With our actual shopping goals quickly met, we headed up to "Santaland". We were underwhelmed. Apart from the massive queue to see Santa (2 hours, 15 minutes), the dioramas were okay, but not great. We didn't bother with photos, since we didn't feel moved by the displays and there were far too many people in the way. With the weather still miserable outside, we went down to the basement to grab some food. THAT (and Santaland) where were the queues were. It took a while, but once we got lunch it was surprisingly good for a department store cafeteria meal. 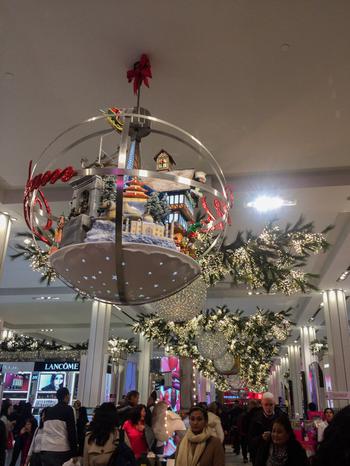 We were also looking forward to seeing B&H, a large photography and electrical store. It's huge, and it is filled with conveyer belts to take products you order from around the two storey store to a separate cashier and pickup stations at the exit. The range was pretty amazing, but the staff left a lot to be desired. They didn't really seem to have a good grasp on the products in their respective sections, and just acted as interfaces to the company's website. I could've just looked it all up on my phone, and just gone in to the store to pick it up and/or watch conveyer belts.

Not really happy with our shopping adventures, we headed back to the hotel and decided to go for a run in Central Park. It was already dark, but everything we'd read about it said running through the park after dark was no problem as long as you stick to the well-lit roads. It was still drizzling, but it was really quite nice. It was also encouraging to see quite a few other runners in the park. There's always comfort in seeing other people doing the same things as you!

After our run we popped in to Fairway to pick up some dinner. We decided to try some of the pre-packaged meals on offer. They are basically higher quality microwave meals, "fresh", not frozen and a lot larger and better value for money than most of the options available on offer in Australia.

We weren't really feeling the Christmas Spirit, but we turned on the TV and found a Yule Log program playing Christmas music while we ate, and then we retired to bead early and watched Die hard. Yippee ki yay, and Merry Christmas. 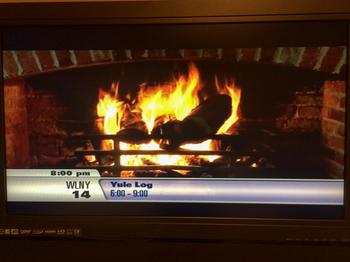 Christmas in New York! Alas, there was no overnight miracle and the city wasn't blanketed in snow. In fact, it was sunny and "warm" outside (4-6º), and felt like spring. We had both slept in and well and truly missed the hotel breakfast, so we popped out to Fairway to pick up ingredients for an awesome Christmas brunch. This is our first Christmas with just the two of us, with the rest of our families being spread across Romania, Tanzania, Malaysia, Thailand, England and Australia. While we ate we found another Yule Log on TV. It was awesome. 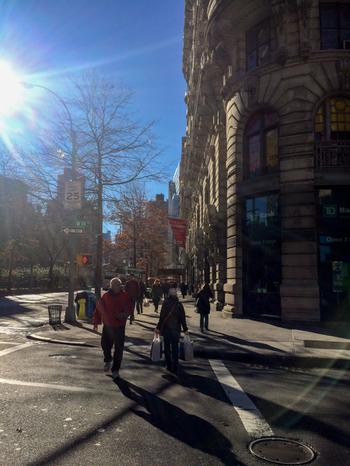 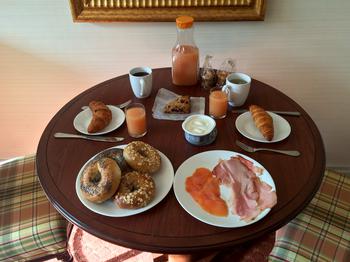 We had evening plans booked, so to while away the afternoon we decided to head to Roosevelt Island. We decided to walk through Central Park for a bit of exercise and to see the park in better light without the drizzle. It was nice to see so many families in the park, and to hear the multitude of street performers playing Christmas tunes. 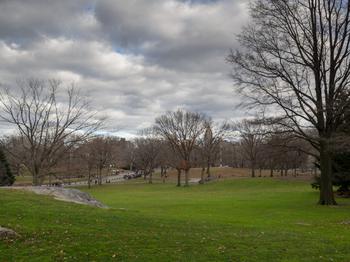 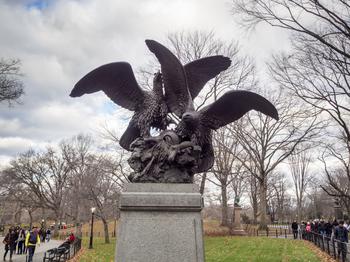 We got to the "Roosevelt Island Tram", which in any other English-speaking country would be called a cable car. America! It's a pretty good ride across the East River, with great views of the Queensboro Bridge and Manhattan. Once on the island we walked south towards the old smallpox hospital. 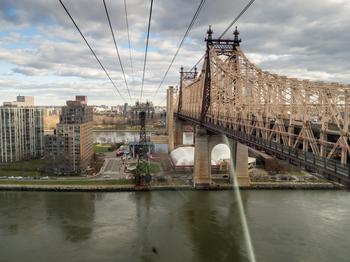 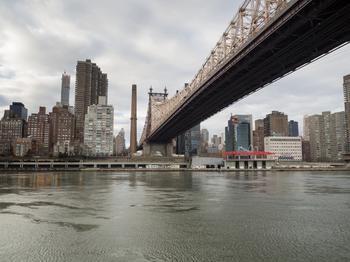 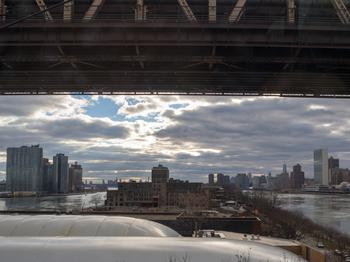 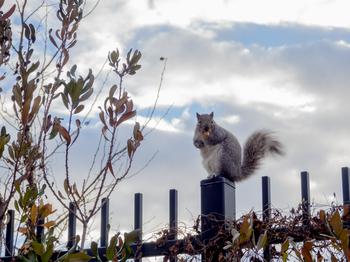 The southern end of Roosevelt Island was really good for photos and wandering around. The abandoned hospital, as well as the demolition of some old buildings to make way for Cornell Tech made for a strangely compelling walk. We also had a good view of both Manhattan and Queens, including some building famous for being "international territory" in Manhattan. 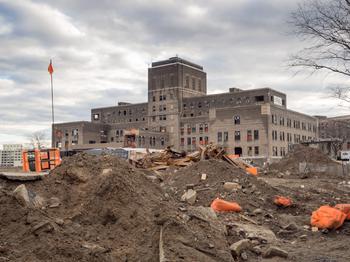 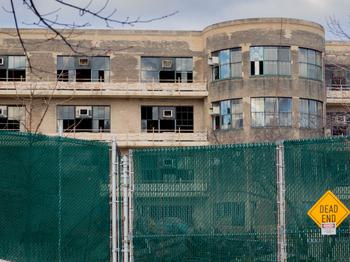 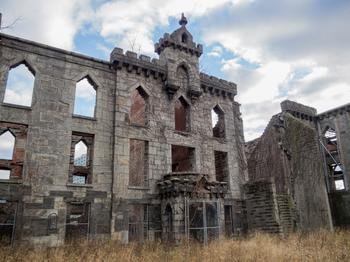 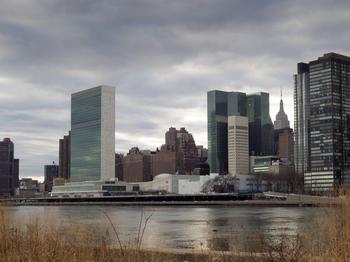 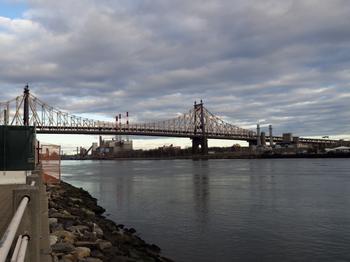 After we were done walking past derelict buildings, we headed back to the visitor centre and caught the bus to the other end of the island to see "The Octagon". This building was originally the New York City Lunatic Asylum. Apparently an octagonal shape was believed to have healing powers in the 1830s, hence the shape of the atrium and the building's name. Unfortunately in 2014 it's fancy apartments, and although visitors are allowed in the lobby, we weren't allowed to take photos of the amazing staircase winding up around the inside of the octagon. 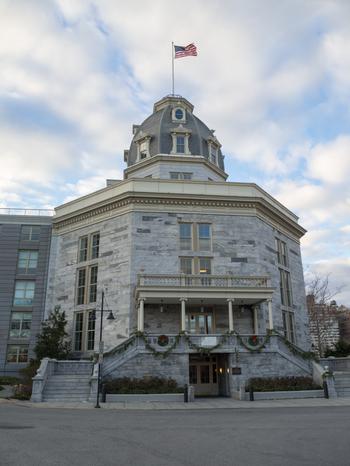 Most of the rest of Roosevelt Island appears to be medium-rise, unappealing apartment blocks. Thankfully the views "off" the island were quite nice. 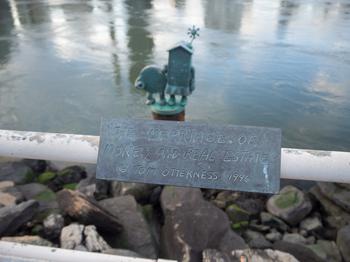 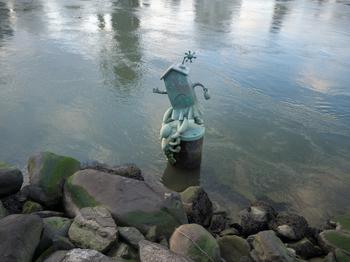 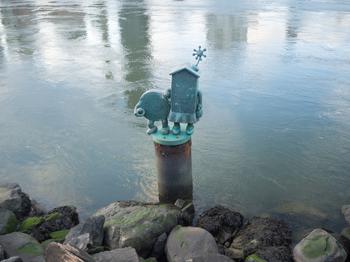 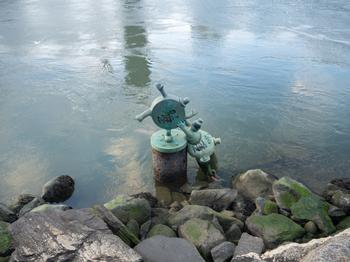 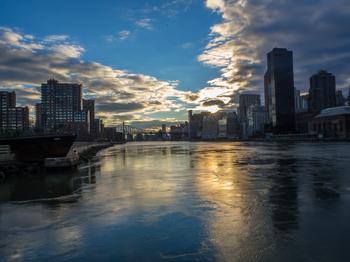 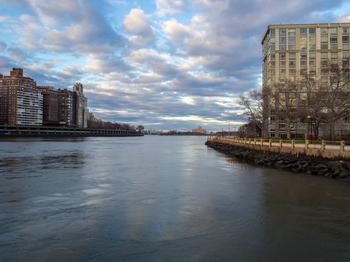 There were undoubtedly more sights to see on the island, but the sun was going down and we had an early dinner reservation, so we hopped back on the "tram" back to Manhattan and walked back to the upper west side for dinner. 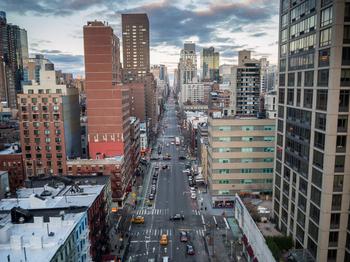 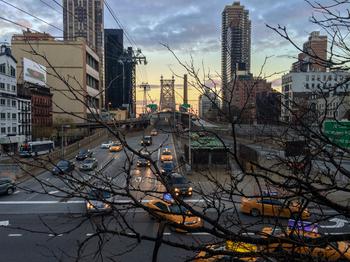 We'd left it pretty late to book Christmas dinner, and we wanted a restaurant close to our hotel, so we had reserved a table at Il Violino on W 68th and Columbus. They were very full, but the service was reasonable given the number of people. The food seemed okay at the time, but suffice to say that the ill-effects both Andy and I felt mean we won't be going back, and I don't feel like endorsing it for others.

After a quick trip back to the hotel to dump bags and get changed, we hopped on the subway to head to Brooklyn. We headed to The Way Station, a "nerd bar" that was having a public screening of the Doctor Who Christmas special. We also met up with some friends from Sydney - Trev and Jo - who were in NYC for their own holiday as well.

The Way Station is pretty cool. The whole bar was kitted out in Doctor Who paraphernalia, and the bathroom is a police box that is bigger on the inside. The cocktails were pretty good as well. They had a list of many "sonic screwdrivers", various different cocktails named after different Doctors. From the sample we tasted, they are all quite alcoholic, but sweet and very drinkable.

It was really great to catch up with friends from home, and also to be around a group of people somewhere with a single shared purpose, especially since it was to watch a special Christmas episode. I don't know if it was just the effect of the crowd, or the episode itself, but I found myself enjoying it a lot more than last year's special, and definitely more than the last few episodes of the regular season.

After the special, and a couple more cocktails, we decided to call it a night. The four of us headed back to the 2 train and our respective lodgings, slightly buzzed, content and happy. 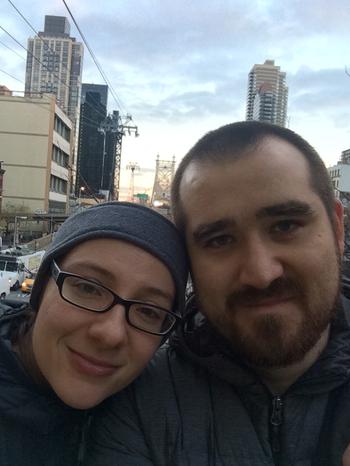 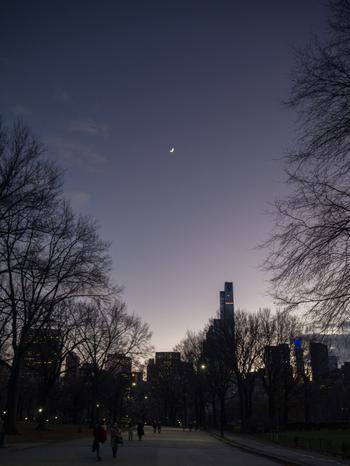