Another catch-up mode post in a post-Christmas slow day covering our first couple of days in New York city.

Price sensitivity had caused me to book our flight from Dulles to JFK at 08:30. This meant, in Cass terms, arriving at Dulles International (IAD) around 07:00. The hotel concierge advised an hour to get to Dulles, so we booked a shuttle for 06:00. We woke up at 05:30 to get our last bits packed, check out and be ready to go. Of course, despite being a couple of minutes late, the shuttle only took half an hour to get to the airport, so yet again we were ludicrously early for a flight. It seemed all the more ridiculous given that the flight time was only 45 minutes to JFK.

Dulles was, like Reagan National, a pretty old and run-down airport that looks like it was due for a makeover about 30 years ago. Somehow we got shuttled in to the TSA expedited screening line, so we breezed through security, belts and boots on. By contrast, arriving at JFK airport at the other end of the flight was a breath of fresh air - bright, modern and spacious. Very spacious. It took us about 20 minutes to walk to the AirTrain station to get the monorail to the subway interlink. Once we were on the AirTrain it felt like it took forever to go through all eight (!!) terminals and get out of the airport and to the subway. JFK definitely feels like one of the biggest airports I've been to in a while. Getting on the subway and planning our journey to the hotel was pretty easy, except for the bit where the first train we jumped on was heading in the wrong direction. Thankfully someone on the train noticed our suitcases and said it was odd for people with luggage to be heading in this direction, and that trains heading to Manhattan left from the opposite platform.

After the initial hiccup, we got through the first line change and then out to our hotel pretty easily. We opted for a compromise between price and location, so we booked a hotel on the upper west side on W 76th Street. The hotel room is amazingly spacious, and very well maintained, in a slightly dated way. It's a very charming old place, and Andy and I were both very happy with our choice for our 10 nights in Manhattan.

We had a look through our long list of food recommendations, and found that The Meatball Shop was only a few blocks away, so we walked over to grab lunch. This is definitely a place I would recommend. Both the meatballs and the cocktails were tasty, and it was great to sit down and have our first real meal of the day. 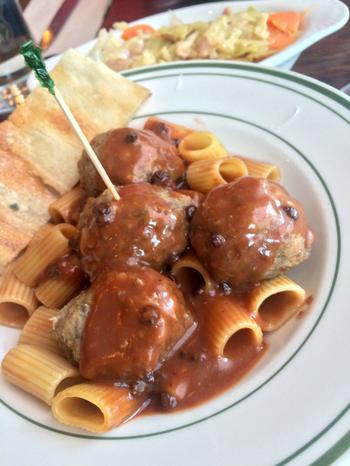 After our early start, and still shaking off a bit of a cold, I was pretty beat by mid-afternoon, so we headed back to the hotel and I promptly fell asleep. After a short nap we headed out to a local grocer, Fairway, to grab some fresh food to make our own dinner and thus take a break from the delicious, delicious grease and salt. It felt so good to be eating fresh vegetables that weren't wrapped in a tortilla, sandwiched between meat patties or drowned in dressing. 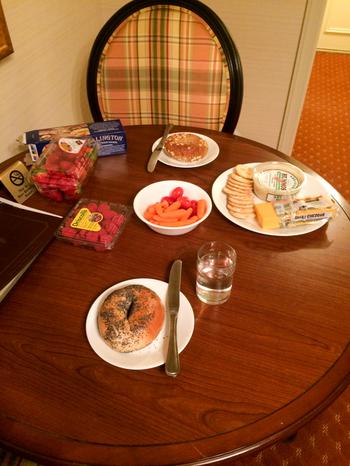 So maybe it's just a thing that US hotels serve "included" breakfast on disposable crocker and cutlery? The Milburn had a good selection of pastries and bagels, plus fresh fruit, so it's nice to know we'll have a decent, simple and "free" breakfast option for the rest of our trip if we want it.

After breakfast we began the horrible task of reconciling credit card statements thus far, and realising how much money we've spent. More than we thought, although not enough to stop us spending more.

After bean-counting, we went for a stroll across Central Park. The overcast sky and light drizzle didn't lend itself to photos, so we just wandered across to 5th Avenue to look at some of the shops we'd wanted to visit. We started at a big glass cube, which probably would've seemed far more impressive if I hadn't seen it so many times in photos, and also if the Sydney Apple Store wasn't a three-storey solid glass wall with the same giant Apple logo suspended in full view. Still, it was kinda cool to be in one of the original "flagship" stores. The queues were amazingly long for the iPhone 6, and the place was packed, but it was good to wander around and see some of the cool stuff that doesn't make it to the Australian stores1. 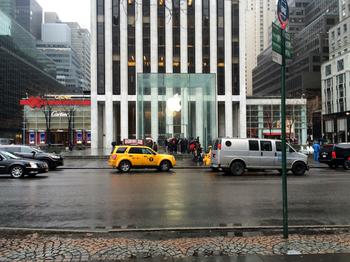 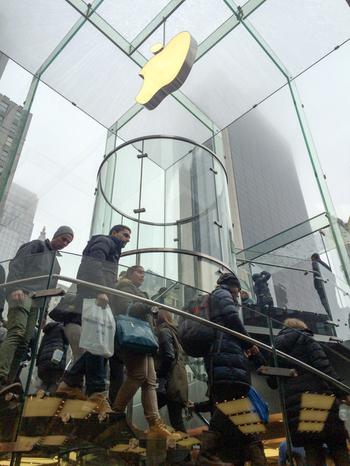 Our next stop was Tiffany & Co, which convinced both Andy and I that we don't particularly want any of the ring options they sell as "wedding bands". The do have some really nice accessories though, and there's an Elsa Peretti bean-shaped money clip I'd be more than happy to receive2. We got out of Tiffany without spending any money (although we did earmark something for later acquisition) and crossed the road to a store with a similar size, but a substantially different target market.

The Uniqlo flagship store is massive compared to the Sydney stores. I'm totally in the middle of a big Uniqlo fan phase, and the range and price is somewhat dangerous, especially with my suitcase already pretty close to bursting at the zips. I restrained myself and only ended up getting a single shirt for myself to wear to dinner, and a couple of extra warm layers for Andy. What was really, really frustrating though was the ridiculously high temperature in the store. I'm used to the idea that stores have heating to make things a bit more comfortable than the winter conditions outside, but it's a little bit ludicrous in some places - like the Uniqlo flagship store. When people are trying on thick puffy coats, it's really unpleasant for the temperature to be in the high 20s.

Overheated and hungry, we left Uniqlo and walked through Rockefeller Plaza on our way to lunch. This was definitely the Christmas vibe we were expecting from New York City. Unfortunately it was ridiculously crowded, and we were very hungry so we pushed through without taking photos3. For lunch we went to Sapporo, a very cozy ramen restaurant with excellent reviews. I think they had other food on offer, but to be honest as soon as I saw "miso ramen" and "Sapporo draft", I just ignored the rest of the menu.

After lunch we had our first impression of Times Square. The billboards and flashing lights were ... well, actually because of the drizzle and our timeline, I didn't really take in Times Square. We found the TKTS discount booth, and then tried to find the end of the queue. It was quite long4, so we decided to opt for the very short line for "play only" and bought tickets to an off-broadway play to see after our early dinner.

We headed back to our hotel and prettied ourselves up for our "dinner and a show". The dinner part was at Gramercy Tavern, courtesy of my brother and his wife, who gave Andy and I a gift voucher as a combined present for our Christmas and birthdays. We had an early (17:30) reservation, which worked perfectly with our 20:00 show. We arrived at the restaurant and it was very warm and inviting. Obviously used to catering to the theatre crowd, they asked up front if we had a show to get to, and when we told them yes and the curtain time, they said they would make sure that we got our dinner and got out of the restaurant on time. We opted for the seasonal tasting menu, which wasn't easy with some of the options on the three course prix fixe. The food was amazing. Nothing felt like a wonderfully creative or adventurous dish, but everything was just exquisitely created and prepared. All of the dishes were excellent balanced, and no dish was under our expectations. The service was very attentive, but never felt "hovery" at all. The dining room was busy and loud enough that it felt comfortable to have a conversation without feeling that you were being conspicuous, but also not so loud that it felt that you had to raise your voice to be heard, or strain to hear servers or each other. 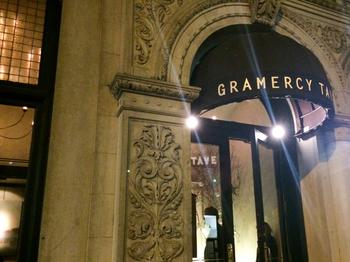 As promised, they stepped up the pace a bit on the speed of the courses to ensure we made it out on time, but we never felt rushed. What was an excellent touch was our waiter coming up to our table after dessert and giving us two small cakes wrapped up "for intermission". The petit fours that came out with coffee and tea were quite substantial, and probably would've served as dessert in their own right. All in all it was an excellent meal, and I would recommend it for anyone with a taste for fine dining. 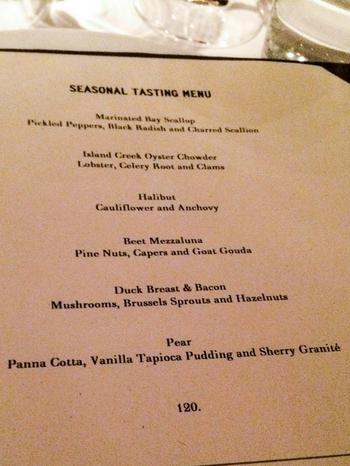 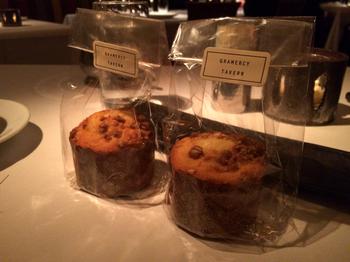 We walked from Gramercy Tavern down to Bleecker street to see our off-Broadway play, "Tail! Spin!" This play is "written" entirely from the words of four scandalised US politicians and associated media coverage. Despite only haven heard of one of the stories before (Anthony Weiner's weiner), theplay was thoroughly enjoyable. Despite having little leeway with the "script", the arrangement of the words (as taken from twitter, instant messages, media reports and other publicly release sources) was absolutely masterful, and the timing and acting was solid from every member of the small cast. 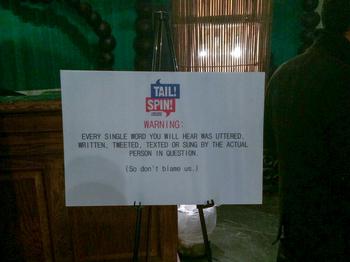 Despite the play being neither a musical nor "Broadway", we had an excellent "dinner and a show" evening, and felt we had earned a big tick on our NYC to-do list. 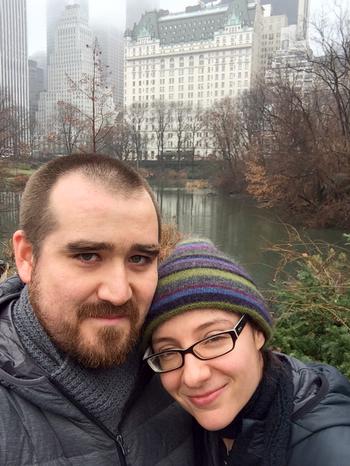