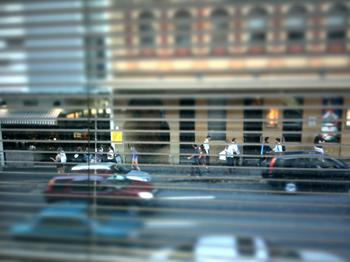 I had to repost these collected responses from Ghostcrawler (Greg Street), the lead systems designer for World of Warcraft. Good answer to common problems faced with dealing with trolls, particularly in the official WoW forums.

There is no law in this world that you can't make a point and be rude at the same time, and most people seem to embrace this.

Nope, there is no law, but I will likely ignore it.

We're willing to take the risk that some amazing gem of design genius might be lost inside a ranting or whining post. If you want us to take your feedback seriously, communicate the way grown men and women communicate in civil society. We're not asking for something unreasonable here. :)

You seem to live in a 60's sitcom. You dont seem aware that the average person curses every 3 words in everyday life, and thats considered normal by most, not rude.

I make full use of the entirety of the English language myself. You should probably tone it down here since this is a relatively public place and profanity understandably offends some people. But really that's not what I meant.

The anonymity of the Internet has fostered a culture where being ridiculously over the top with your communication is pretty typical. We're just asking you not to do it here. If it helps, imagine you're in a meeting room with all of the WoW designers and you have 30 seconds to make your point. Are you going to waste it on whining, you-hate-my-class, you-don't-play-the-game stuff? Or are you going to try to make an intelligent point that the designers will actually listen to and hopefully take under advisement?

If you've ever seen a court of law or a government debate, those discussions can get pretty heated, but the participants generally try to maintain a modicum of respect for each other. They want to focus on the legal and / or logical strength of the argument and not the color of the delivery.

In writing, you are generally supposed to show restraint in your use of adjectives and adverbs. Yes, they are necessary in specific situations, but if you overuse them, you risk bloating, confusing or derailing the actual point you're trying to make. The same is true of a forum post. Don't dress it up with junk, which around these parts is typically QQ. Speak plainly. There was a recent thread whose thesis was "Blizzard lies and here's an idea I had for a spell." The mistake there sort of speaks for itself.

Collected from the forums via WoW Insider.

With the recent Macheist promotion, it's unsurprising that there's been a wave of "tweetblasts" concerning Macheist, and then the predictable complaints about the "spam" on twitter. Is it really that bad?

Of the people you follow on twitter, how many of them delight, entertain or inform you with every tweet? The Macheist tweetblast is one tweet, then it's gone. Yes, this can be exacerbated by having multiple people on your twitter feed post the same message, but that happens so often on Twitter with the latest viral video, meme or photo of a speedo-clad politician.

Of course, that said, I don't post the links myself on my main twitter account. I have a second account for sending out things like that, because I know that many people don't like that style of tweet, and, well, sometimes I try not to be a dick. But I have no issue with people posting them, and if I unfollow you, it's nothing to do with a tweetblast, it's probably personal. :P

The problem with having regular haunts and getting to know the people who serve you in, say, a coffee shop, is that on the occasions where you want a coffee but DON'T want a chat, you're stuck with either going somewhere else and getting inferior coffee, or appearing rude and standoffish by grunting your order, collecting it and walking out without any banter.

Yes, it's a first world problem, and yes I want a coffee.