Okay, so I'm sure that there are more than enough posts about the iPad floating around on the internet, and after my rant yesterday, I don't know if I'm best placed to add to it, and yet here I am...

So let's run through the basics. Apple announced their tablet today, and it's called the iPad. I think there have been enough feminine hygiene comparisons made today, and seriously, did nobody stop and think about this name? Still, I remember the complaints about "MacBook" and even more complaints about "MacBook Pro" that have since disappeared. I'm sure that by the time iPad is actually released, people will be used to the name. I have to say though, I was looking forward to the slow phasing out of the iMeme.

Looking at the overall view - this is a gigantic iPod touch. Watching the keynote, and the marketing video, it's a very slick interface. In typical Apple fashion, it's a very polished design, and the redesign of the core iPhone OS apps for the larger display is very well done. The keyboard, although still virtual (more later on that), is scaled right up, and judging from the demos, looks to be much nicer to type on than an iPhone. The 1024*768 resolution, although a now odd aspect ratio of 4:3, is a very nice size for portable internet browsing, as well as text/email/calendar/etc.

So the problems ... It's just a 10" iPod touch, with all the negatives of the platform. It's locked down to the App store. Personally, on my iPhone, I don't have a problem with that. Partially because I have almost all the apps I could want (on my phone) available. But, at least for me, the transition from "pocket" to "portable" also increases the expectations of what I should be able to do on the device. An example use case for me would be a "couch computer". If I'm watching something on TV that's live and/or doesn't require my full attention, odds are I'll be chatting on IM, checking twitter and flicking through random websites at the same time. Through push notifications and app-swapping, I can do that on my iPhone, and at the moment, that's largely what I do. But if I'm buying a new device, which seems perfectly placed to be a "couch computer", then the idea that I'm limited to a single task at a time is just ridiculous. For all the disdain with which Apple treats netbooks, an eee-pc running Win 7 can quite easily handle browser + im + twitter client on a 1GHz processor.

I was impressed by the iWork apps being ported across to the iPad. They look quite impressive, and the idea of creating a presentation on the iPad, and then running that out into a projector is pretty cool, and makes it sound like this could be a great road warrior machine. But then what kind of road warrior wants to close down Keynote to open up email? Oh, and notice anything missing from the marketing material on the iPad?

And iPad will work with all the popular email providers, including MobileMe, Yahoo! Mail, Gmail, Hotmail, and AOL.

Compare it to the iPhone information, which features Exchange integration prominently in several locations. While it makes no sense that Apple would have Exchange support in the iPhone OS, and not have it active in the iPad, it is conspicuous in its absence. Here's hoping it's just marketing focus and not one of Apple's famous "arbitrary" feature restrictions.

The 3G version of the iPad raises another couple of questions ... Firstly, another data subscription? This is getting expensive. The AT&T plans announced in the event seemed to be met very positively (at least price wise, no comment on AT&T service reliability). It remains to be seen if Australian providers will come anywhere close to this. History says no. Secondly, Micro SIM? From a little bit of research, it seems like Micro SIM is a "normal" SIM card cut a little bit smaller. Of course, it's not regularly used in Australia (or the US, from what I can gather), making it seem like the only reason to do this is to allow mobile providers to control data plans for the iPad through what chip they provide. Maybe I should take the tinfoil hat off, but I really don't see why this device needs a different SIM format.

God this is going on, I didn't realise I had so much to write.

So the keyboard ... Apple did something that really surprised me, and announced a dock-connected plug in physical keyboard. While I think that's going to satisfy some of the people that dislike the virtual keyboard, I was really digging Andy Ihnatko's rationale that Apple have designed an interface that "doesn't require" a physical keyboard, and they were strong-willed enough to stick with touch and touch alone. That said, I like the idea of a physical keyboard accessory. What I don't like is that you are limited to portrait mode, due to the position of a dock connector. To quote Phil Schiller from the presentation ... "Keynote runs in landscape orientation, because that's the way our slides are. Our slides are designed horizontally." Well I guess Keynote doesn't work with the keyboard then.

On a related note, there's no watching movies in landscape while docked, which just seems silly. Sure, you have 10 hours of battery life while watching video, but if I could be docked where I'm watching my movie, I would be. Obviously it's not a problem if you're just "cabled" rather than "docked", but it still seems a little odd in a device with video as a major feature.

I feel like I should mention iBooks, since that's the other "big ticket" feature of the iPad, and is one of the key features that will pit Apple against the Kindle. So now I've mentioned it, and I'll mention the "iBook store", and I'll mention "US Only" and I'll recall the lag between the US and Australian versions of the iTunes music store and movies/tv.

To me, the one big exciting thing about the iPad is that Apple, presumably aided by their acquisition of PA Semi, designed and built the chip that runs this thing. Apple designing silicon that is tailored to the features and functionality of the devices they make is pretty cool, and something that I will be watching over the next iterations of the iPad / iPhone / iPod lines.

I dunno, maybe my opinions will change over the next 60 days before launch. Or perhaps after it's launched and I've had a play in the Apple store. But I'm certainly not lining up to hand over my money, and at the moment a Win 7 and/or hackintosh netbook is looking a much more attractive option for the niche the tablet would fill. Perhaps the "Apple Experience" will be enough for the segment of the general public that have the money to spend, but I think for me, I want more than a 10" iPod touch.

One of the things I am most looking forward to about Apple's "whatever" announcement tomorrow is the end to the rumour cycle. There will be 24-36 hours of wall to wall coverage of what they actually released, but then life will continue and people will move on.

Don't get me wrong, I'm a proud Apple fan, and I will be seriously looking at / considering whatever they release tomorrow, but I am SO DAMN SICK OF HEARING ABOUT IT. To adopt Andy Ihnatko's term, the Rumoured Apple Tablet (RAT) has been an item of fanboi speculation for so long that I thought that when the mill started turning again late last year it was just the regular repeat of the same old story. Over the last few months the chatter has been steadily building, to the point in December or so last year when I realised that I was pretty convinced it was going to happen, and a lot of the tech blogs/podcasts/etc that I follow were also equally convinced. But since then we've had 6-8 weeks of CONSTANT barrage of rumours, "leaks" and "prototypes" that are just starting to get painful now.

Guys and gals, we get it, you're excited. But you know when it's gonna be announced, you know that everything out there is either a scratching of the surface of what the RAT actually is, or else it's just a flat out fabrication. Probably mostly the latter, given the lack of takedown letters flying around.

So Apple, rock on tomorrow and bring out anything ... then at least I know that I only have a day or so of Jesus Tablet coverage left. 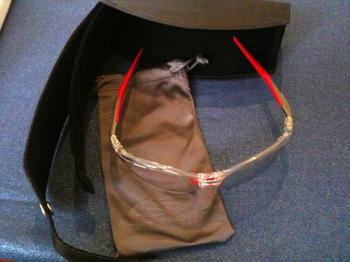 My new cycling sunnies. Photochromatic clear, so about 20% grey in low light, 78% in bright sun.

So I finally cracked the shits with Optus and their spotty reception around UTS, and absolutely terribad data network. Let's not even mention charging for tethering, since the data network was so bad. I bought a Telstra pre-paid sim, and decided to port my old number across and have a play.

Perhaps activating a new number, and porting an old number, over the phone on a Friday evening wasn't the smartest idea. The new number came up straight away. The port didn't, and it wasn't until Monday evening that everything transferred across number wise. Once that was done, I found that the default iPhone APN for mobile data wasn't working. I could browse the internet, but couldn't access the iPhone specific stuff (tethering / unmetered site to check usage, etc). MessageBank also seemed to have failed somewhere in the number porting.

So bracing myself for the worst, I put my headset on and called Telstra. After 18 minutes on the phone, my internet is fully functional, tethering is enabled, and a request has been lodged for voicemail issues. The two people I spoke to were well spoken, only slightly too chirpy, and didn't bullshit around.

So far, as much as it goes against the common trend, I'm happy with Telstra. Here's hoping the honeymoon continues.

Sen from my iPhone with a functioning data network.