Okay, I haven't even finished setting up the main theme for Robot Apple Monkey Blog, but thanks to WPtouch, I now have a very nice looking iPhone skin. Visit on MobileSafari and tell me what you think.

Okay, so one of the "perks" of my job is that I'm attached to an SLA that supports a lot of the uni's clerical staff. This is basically the textbook definition of public service cubicle monkey.

I went up there to roll over an ANCIENT computer. Standard policy is just to roll over the computer itself, leave all other peripherals the same. This old machine we're taking had a PS2 keyboard. Yeah, old school. So we needed to find a USB keyboard. We don't have any spares in our stores, so we scrounged and stole a keyboard off an old PowerMac G4. Obviously, Mac keyboard + windows machine doesn't appeal, and thus begins a discussion on supplying a keyboard.

Seriously, we had a 30 minute "discussion", involving 1 IT and 3 bureaucrats about getting a USB keyboard, whether IT took a previous USB keyboard that should've been there, if there were any spare USB keyboards in the department, roaming around and searching... All because they didn't want to buy one.

Let's think about this. Just MY hourly wage for 30 minutes would buy a keyboard and still leave change for lunch. Now put in the salaries of everyone else. Suddenly we're talking Optimus Maximus keyboard ranges, seriously.

Focus on the big picture people ... fiscal efficiency is NOT acheieved with keyboards, forms and cheap teabags.

So, a lovely friend threw me a code for the Warhammer Online closed beta, once it kicked off in Australia. Unfortunately, the download took several days to complete, not aided by the fact that it clocked in at a whopping 9.4GB, so it had to be largely downloaded during my off-peak period to avoid capping (see previous rant). I also have the fact that I'm running on Mac OS X at home, so for me to play I need to reboot into Windows. Not hard, and I'm all set up for it, but it requires me to actively disconnect from everything I'm doing, so takes that much more effort.

Long story short, I've only managed to get in to the game for about an hour so far, and this weekend the Closed Beta makes way for the "Preview weekend", followed by the "Open Beta." Of course, I'll be in both, but it seems like I've missed a large part of the beta program. Oh well, it happens.

Today, thanks to a delightful ear infection, I'm at home, so have some free time to have a look around. I decided to try and read up, see what the already active Beta Community was saying, only to be met with the following message:

Collectors Edition and Australian Beta Testers do not have a forum. Please use in game bug, feedback, and appeals tools.

Well that sucks. I can't quite understand what the reasoning is behind that, but it seems to be a really good way to annoy people that are beta testing your product for you. Thankfully, there are a few good unofficial forums around, that have very large populations, including many beta testers and even some developers, and since the NDA has now been lifted, free discussion can be had.

Still, seems like a fairly poor move on the part of EA Mythic for no real discernable reason.

Today Apple announced the availability of movies, for purchase and rental, on the iTunes store. As is to be expected, I have a few issues with this.

Like the TV shows, which were announced earlier this year, there's a significant price disparity between the iTunes prices and dvd prices. Or rather, there isn't. The purchase prices for movies on the iTunes store are $10 for "catalog", $17.99 for "recent" and $24.99 for "new" releases. Obviously these are just guidlines, since Star Trek: Generations, which I would definitely consider "catalog" is $12.99. That's better than all the other Star Trek movies though, which for some reason are "recent", and thus $17.99. All of the Star Trek movies can be picked up for around $20 each in a shop, on a physical medium, in a plastic box, shipped from a warehouse. If you buy them all at once, they come down to $15 each. Yes, I'm aware that there are costs associated with digital distribution, not least of all the bandwidth required, but these movies should be significantly cheaper than their dvd counterparts. I suspect that a large portion of the blame for this lies with the big bad movie studios, who can't seem to see beyond their short-sighted quarterly earnings reports, but I wouldn't put it past Apple to put all the blame on the studios while not being overly aggressive in driving those prices down.

But that's just the start of the financial pain train ...

Take my aforementioned example of Star Trek: Generations. That comes in at 1h 57min 54sec (thanks iTunes). This translates to 1.39GB. That's really not that bad, given how cheap storage is and such. But comparing that to the download limits on some typical broadband plans in Australia and it doesn't look so good.

Say you buy or rent one movie per week. I presume that's not an unreasonable target ... You're looking at close to 6GB per month, just on your iTunes movie habit, let alone the music purchases you're supposed to be making, or any other internet usage. So let's check what we have to spend with the ISPs to get that.

First up -this is going to seem comical, but please, bear with me - let's have a look at Telstra. $40/month will get you ADSL, hobbled to 1500kbps download speed, and a massive 400MB (not a typo) of downloads per month. Wow. $70/month will get you the same blistering speed, but a 12GB limit, so we could rent and download two movies per week. Slow down! Of course you could get that 12GB limit for $10/month less ... if you slowed down further to 256kbps download. On the plus side, at that speed, you wouldn't be able to download more than two movies per week anyway, so your limit would be pretty safe.

Since doing this for even just the major Australian ISPs will get boring fast, I'm going to skip to the ISP widely regarded as the best in $/GB terms - TPG. Ignoring off-peak limits (since I think the majority of people included in this example won't, or at least shouldn't have to, rent a movie at 3am) we need to spend $50/month to cover our target, and we actually get 18GB of peak downloads, which means a ridiculous three movies per week, plus a bonus movie per week in off-peak time if we're so inclined.

Seriously - is this really how we are Building Australia's Prosperity with our National Broadband Network? Okay, it's not likely to happen via iTunes any time soon, but is 3 movie rentals per week really that odd? There's a big problem with the iTunes store selling and renting movies, but this one isn't Apple.

I understand the concept of expansion packs. They can breathe new life into an old game, drawing more money out of the installed user base. A well written (and marketed) expansion can also serve to bring new customers into the franchise. But sometimes computer game franchises, as with movies, television shows and musical groups, can take this a bit far, and an expansion will come out that was definitely one expansion too many.

The Sims is a fairly long-running computer game franchise, that has been through 2 core versions of the PC game, along with several spin-off games on various platforms and many, many expansion packs. To be honest, I pretty much lost interest in The Sims after creating a household based on my friends and causing the tragic clown to send them all insane before burning them all alive. 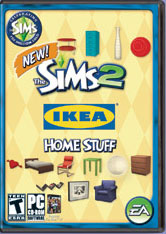 Anyway ... Many people probably already think that The Sims franchise has long past the point of too many expansions. I think that with The Sims 2 IKEA Home Stuff, there is now no doubt that it's time for this franchise to be put in a bathroom with no doors and a tragic clown.

Maybe things will be better with The Sims 3?