Starting from behind, as usual. As I write this, it's the morning of Day 3, and rapidly approaching the point-of-never-starting, so let's start the recap.

The day before. It's been a fairly hectic last few weeks, with a fair bit of work stuff going on and a couple of visitors from YVR/SEA, including my skip-level manager. Thursday was a mad scramble, with a day of trying to:

It ended up being a very long day, and then a long night getting stuff ready. With our flight being at 15:20 on Friday, I wasn't too worried, but was definitely pretty exhausted by midnight when sent off my last bits of work1 and crashed for the night.

Friday morning was probably the first time I started to feel like holiday-mode was kicking in. Packing was mostly sane, thanks to piggy-backing off Andy's lists. We ended up being an hour later to the airport than planned, but still had 2 hours2 to enjoy the Etihad lounge before the flight. Well, we would have had 2 hours if we'd been able to find it. I appreciate that airline lounges are supposed to feel exclusive and discreet, but to walk past it twice… Perhaps that just speeks more to my powers of observation and/or tiredness.

Once we found the lounge, I was pretty impressed with the quality of food and drink, right up until I saw someone ask for a Hendricks and Tonic and got a slice of LEMON?!?!? What. The. Fuck. Needless to say, I had Tanqueray.

The first flight of the trip went pretty much as expected. We had decent seats, the old Italian couple next to me had good plane etiquette, and the food, service, and in-flight entertainment were known-good quantities that didn't disappoint. I didn't manage to sleep as much as I would've liked though, which was a bit of a theme of the trip (one that become more annoying as the trip progressed). Once we got to Abu Dhabi, we didn't really have much time to experience the airport3 as we only had an hour and change until our connection to Belgrade. Just enough time to saunter to the gate and get fleeced on a bottle of coconut water.

There was nothing "wrong" with this flight, but just a few things that added up to make it a little less enjoyable. We were sitting in front of an over-wing exit row, which meant our seats wouldn't recline. This was particularly annoying because we had planned for this to be our sleeping flight, since it worked well in terms of timezone adjustment, and was 6 hours long, so a good length to sleep through. As a smaller plane with a 3-3 config, it meant we had a person in the window seat who couldn't get out without both of us moving, which was also annoying. The flight was fine otherwise, but I was definitely more crotchety than usual upon arrival in Belgrade.

We had a 6 hour layover in BEG, which was unfortunate. We had lounge access, but no time in AUH, and the reverse in BEG. Instead we found a good cafe/bakery and had some decent pastries and passable coffee, and stretched out a little after cramped aeroplane seats. After a snack, and a bit of duty-free window-shopping (Plum Brandy in tube form!), we found some seats with a view and proceeded to squander it by doing work - Andy some research follow-up and me resume reviews. Note to future candidates: No matter how good you (think you) are, you are not a Senior Software Development Engineer if you only have 3 years work experience out of university. 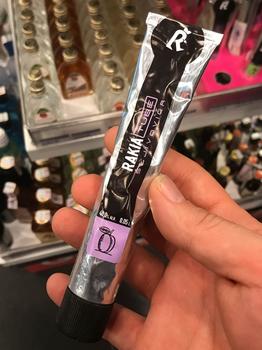 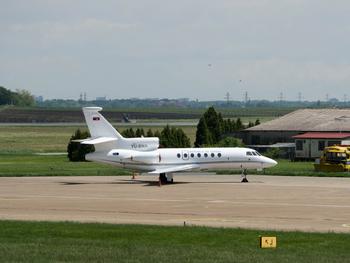 23 resume reviews later (4 made it to "phone screen"), it was finally time to board the last leg of the journey.

Our last flight was a nice, short hop west along the Danube from Belgrade to Bucharest. I was expecting a small plane, given the distance, but I didn't think we'd be trading the jets for propellers. I guess if I'd done a little more flying short distances in Australia I would've expected something small and turboprop.

We were in a very "well-loved" ATR 72. I remember thinking on check-in that we'd done well with our 2A/2C seats, but since the ATR 72 only has passenger doors at the rear, this was not the advantage we were expecting. Having a window seat, in front of the wings (and very low to the ground) was pretty awesome though, and we got some amazing views of Nikola Tesla Aerodrome (BEG) after takeoff, a peek at Belgrade through the clouds, and a lovely view of Henri Coanda Airport (OTP) as we flew past to the South on approach. The flight was surprisingly smooth for such a small plane too. 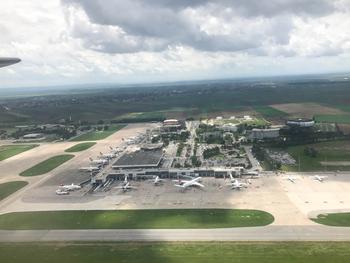 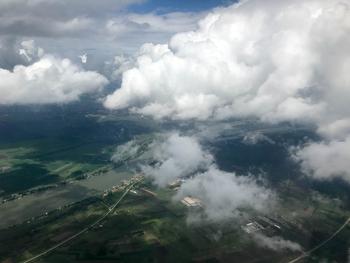 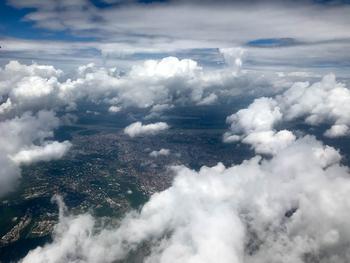 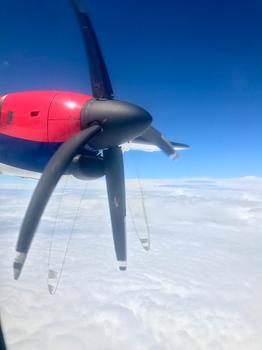 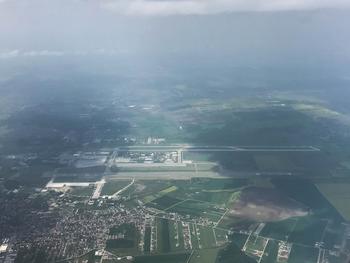 For what feels like the first time in a while, my bags arrived at OTP without incident, so we headed off to Andy's grandmother's place ("home" for the trip) to settle in.

Once we'd dropped bags and started our journey on a fortnight of over-eating, we walked to the Metro stop to head into town to pick up our race kit for Sunday's 10km race.

It's still a little weird for me to be in Bucharest with warm air and no snow to be seen. I've been here enough that I have a passing familiarity with the city, but in my head it's always cold weather, snow, and winter glory. This is the third time I've been in Spring/Summer, so it shouldn't feel weird, but it does. Walking down tree-lined boulevards with fresh pretzels in hand is pretty awesome though, so no real complaints. Once we had our race kits, we returned home for round 2 of over-eating.

As if by design, we arrived in Bucharest on the day of the Eurovision grand final. Being in the same timezone as Kiev, we expected an evening full of glorious music and costumes, but unfortunately the Western European time zone won out, and the show didn't start until 22:00 local time. We visited some family for dinner, and enjoyed round 3 of over-eating, while we waited for Eurovision to start. Unfortunately my stamina gave out after Australia (song #7 this year) and I slept through the rest. I'll catch up on the other acts later, but at least I saw the triumphant return of Sunstroke Project and their epic sax guy from Moldova.

More catch-up in the next entry...