As expected, Bucharest is a fairly low-key, laid-back and lazy affair for us. A combination of jetlag, spending time with Andy's grandparents, and just general unwinding means we haven't really done much in terms of an "active" holiday.

Yesterday was just a short walk to local shops to pick up some food1 and a pre-paid SIM so I could maintain my internet addiction. No, I'm not doing as well at disconnecting as I intended, but I think I am doing about as well as I expected, and I'm definitely doing better than normal.

Sleep is still a bit out of whack. After crashing before 21:00 on the first night, Andy and I both were wide awake at 04:00. We managed to drift back to sleep after a couple of hours of reading, and then woke up again at 09:00, mostly refreshed. Last night we lasted slightly longer, thanks to evening coffee, a game of checkers, and a HORRENDOUSLY cheesy Turkish soap opera2. We ended up crashing out at a thoroughly respectable 23:00. Unfortunately I still woke up at 03:00, and only got a couple of fitful hours of sleep between then and 09:00. But I did work out how to get Disqus working with Octopress3, and caught up on some #AUSPOL. You can either class this as either "not a total loss" or "lack of sleep is the least of my problems".

Today's plan was to hit a large mall to pick up some specifically requested things to family back home, and to hit up a couple of our favourite Romanian shops to get some goodies for ourselves. Andy had a solid outing at a Romanian fashion label's store4, and we both marvelled at the extensive range of awesome availabile in the local LEGO store. Seriously, so jealous. I'm jealous of both those with space in their homes to have LEGO displays, and of Europe for the availability of official LEGO stores and access to the amazing large sets.

We managed to fullfil one of our goals if buying a tabletop game in a language other than English, getting both Citadelă and Coloniștii din Catan: Jocul de Cărți. I've played Citadels before, so I'm not too worried about that, but I am a bit worried about the Catan card game, since it relies heavily on the text on the cards, but I guess it's a good way to expand my Romanian vocabulary beyond food and television commercials. 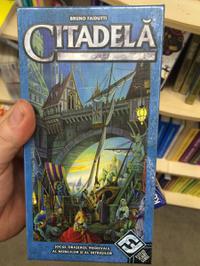 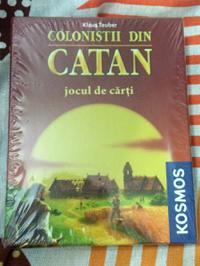 After an early dinner, we headed out to Ateneul Român (The Romanian Athenaeum) for a chamber recital. The inside of the building is quite impressive, without being too over the top and blingy. We only saw one of the small performance rooms, not the main concert hall, but the scale of the building, especially the lobby, is awe inspiring, especially when you're only sharing it with 50-odd other people there for a small recital. I feel like I should be able to throw a couple of architectural words around here, but I've got nothing. And thanks to either rushing out the door, jetlag, or a combination of both, I didn't take my camera either, so I had to rely on a couple of iPhone snaps inside. I didn't end up getting any pictures of the outside thanks to the weather, but I will try to get a few shots on Thursday when we're back in the centre of town. 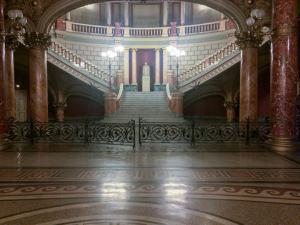 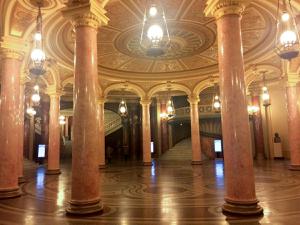 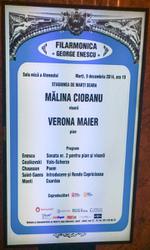 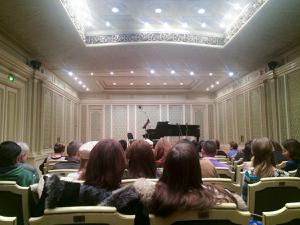 The concert itself was okay. I didn't feel like the violinist was exceptionally good, but she looked quite young and definitely nervous at the start of the recital, so it's possible that this was one of her first public performances. The pianist accompanying her seemed fairly good at playing the piano, but not very good at accompanying someone else. The piano was frequently too loud, drowning out the violin. Completely unrelated to the performance, jetlag was also kicking in strongly, and staying completely alert in a warm, dimly lit room filled with classical music was impossible. I realise I've made the concert sound a lot worse than it was, I did quite enjoy it, I'm just nitpicky and a horrible person.

With the weather turning from wet to very wet during the concert, we abandoned our plans of late-night book shopping, and jumped in a taxi to head back to Andy's grandparent's place for ceai verde and pufuleți5 (my brain wasn't up for translating card games) and even more of the awesome Turkish soap opera. 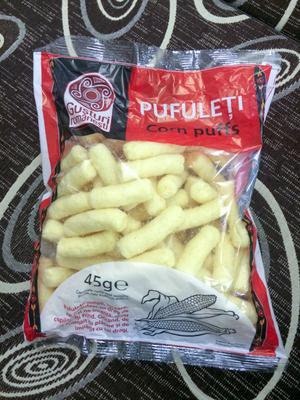