This entry is the start of my second paper journal on this trip - not something that's entirely relevant to the online version, but something that was somewhat surprising when I started writing at the beginning of the trip.

Yesterday was a series of unplanned events. Our first planned trip was a quick ride on the 6 train. This subway line "terminates" at the Brooklyn Bridge / City Hall stop at the Manhattan end. Before the train heads back uptown, it loops through the old disused City Hall platform of the subway's predecessor - the Interborough Rapid Transit (IRT). This platform is actually available for guided tours, but not in winter. Thankfully, passengers are able to stay on the downtown 6 train after it "terminates", and get a bit of a view of the old platform as the train rolls through on its turning loop. It was a bit too dark and fast for photos, but it's definitely something that I want to come back and see properly, preferably in summer.

Since we were already at the Brooklyn Bridge, we decided to deviate from our plan slightly and pop above ground for a quick peek and some photos of the bridge. So began the complete unravelling of our plans for the day. It was VERY crowded on the pedestrian path heading up to the bridge. We only went to the start of the cables on the bridge, since neither of us really felt like walking through the crowds for the entire span. We took plenty of photos, mostly of other tourists taking photos of the bridge. By the time we got back to the subway station, we were too hungry to wait until we got to Queens (our next planned stop), but if we stopped for lunch it would be too late by the time we got to MoMA PS1 to have a meaningful attempt at seeing the museum. Unfortunately, this was the last day of our trip that MoMA PS1 would be open, but food took priority, so we had to bump it to the "next time" list. 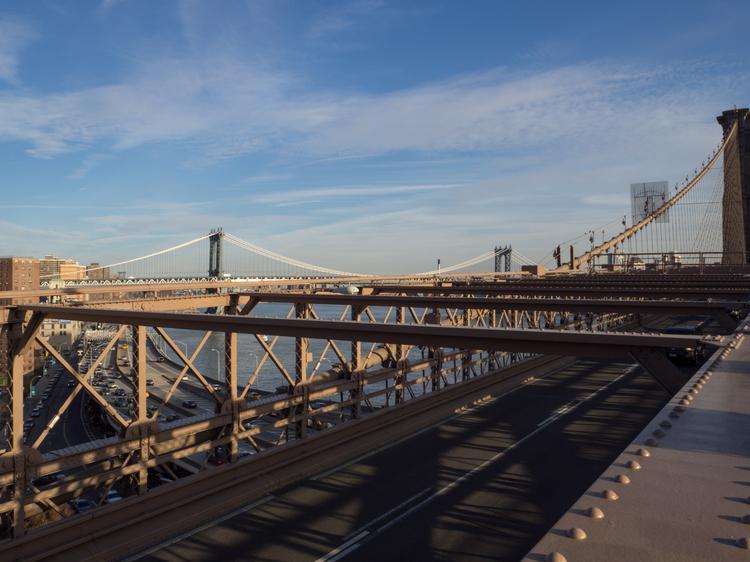 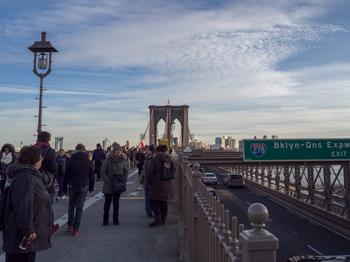 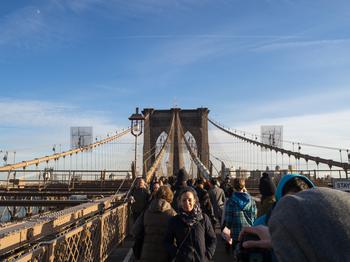 After a ludicrously cheap lunch1 we decided to hang around the south end of Manhattan and walk over to the 9/11 Memorial. Walking between the buildings of the financial district, without any direct sun, we realised how cold it had become. I was still dressed for 8-12º and clear, not 4º, overcast and in a wind tunnel of skyscrapers. We got to where we thought the memorial should be, but instead found concrete barriers, fences and construction work for a new transport hub. Foot traffic for the memorial was funnelled through a couple of streets and around the outside of the new One World Trade Centre tower and into the memorial gardens. I know a few people who felt moved by the 9/11 memorial, but I have to say I didn't really feel it. We didn't get in to the museum (~3 hour wait), but we did see the two pools that occupy the footprints of the twin towers. The pools themselves are amazing, and give a sense of perspective on the size of the towers, but as far as emotional impact, I felt that the 9/11 exhibit at Newseum (a wall of international headlines and the wreckage of the transmission tower from the top of one of the towers) was a far more powerful memorial. Perhaps a large part of it was the crowds. It's very hard to reflect on the names of people who lost their lives when you're being jostled by hundreds of people and ducking selfie sticks.

After the memorial we decided to walk along the banks of the Hudson to catch a look at the Statue of Liberty. This was planned for the morning of the 31st, but since we were so close, we decided to stick it out in the cold a bit longer and have a look. Best. Decision. We caught sunset over New Jersey and behind the Statue of Liberty. The scattered cloud set off the setting sun beautifully. I tried to simultaneously take every possible photo, and also pick up the pace along the shore towards the Staten Island Ferry terminal. 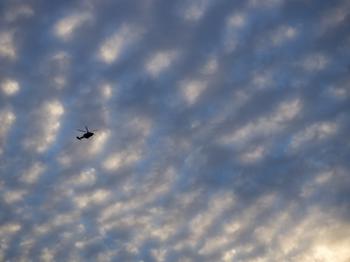 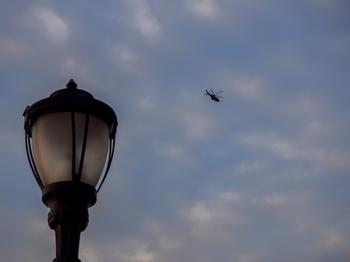 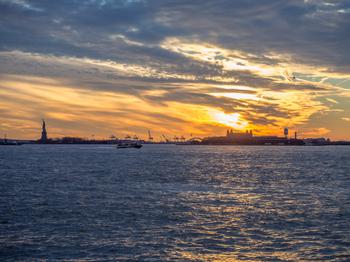 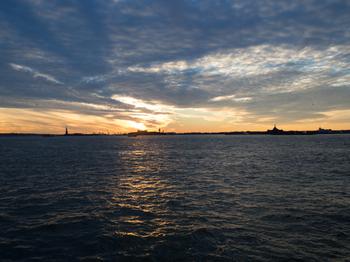 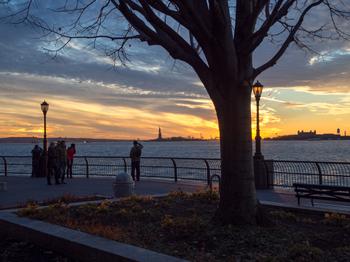 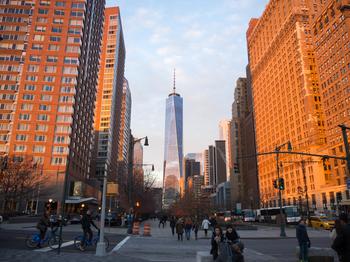 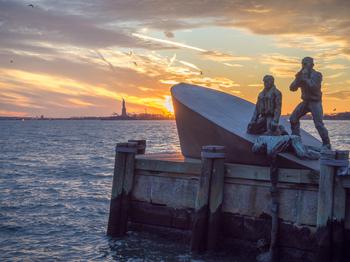 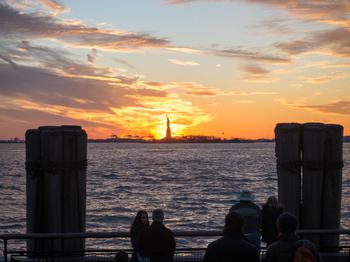 As we got to the ferry wharf, we saw people breaking into a run to catch the departing ferry. I have a fairly long-standing rule about not running for public transport, but Andy convinced me to leg it, and we were literally squeezing sideways through the big doors as an attendant pulled it shut. If it had been closing vertically, I would've dropped and done a Geordi La Forge style roll underneath2.

Once on board I realised how cold I was, and that my fingers had become so cold they were numb. I tried to warm them up as best I could as we stood outside on the ferry and tried to pick a good vantage point to see Lady Liberty as we passed. Very. Best. Decision. We go to see the full sunset from the Hudson River behind the Statue of Liberty as we sailed past. Pretty special really. I haven't counted up how many photos I took. It was a lot3. 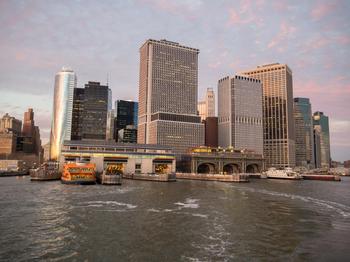 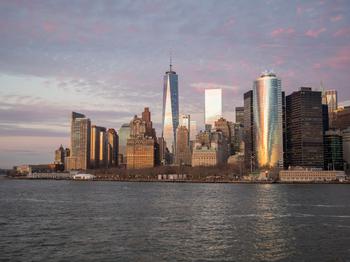 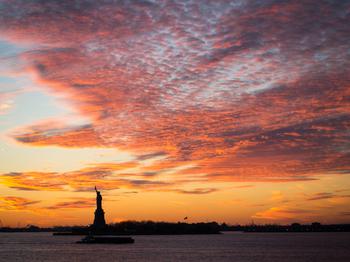 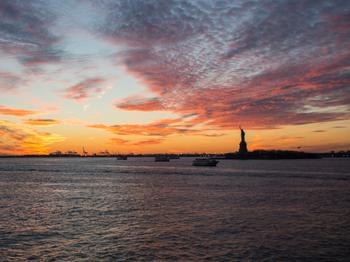 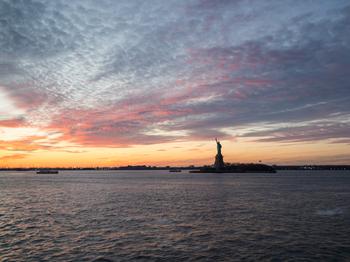 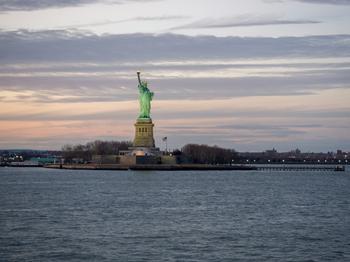 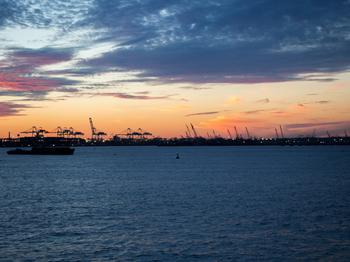 We spent the rest of the ferry trip to Staten Island inside the ferry's cabin, and again for the whole trip back to Manhattan. As a result, by the time we were back at Whitehall Ferry Terminal my hands were fully able to feel pain as they warmed up. Our plan for the evening had been to get to Momfuku Noodle Bar at or near 17:30 when they opened, to try to minimise the wait to get in. We missed the mark somewhat, arriving at 18:20 and being told it was a 90 minute wait. Being very cold and more than a little hangry, I said no, which earned me a patronising "maybe next time" from the hostess as we walked out. We ended up in a Thai/Vietnamese/Malaysian4 place called Mamak. It was cheap enough (but not cheap), and not bad. The fresh spring rolls were quite good, and the mixed seafood laksa certainly delivered on the seafood front. It was quite tasty, although very different from laksa I've had in Australia, with a lot less coconut milk and a fair bit more oil. It certainly wasn't Momofuku, another destination relegated to the "next time" list, but we were warm, well-fed and on our way back to the hotel before Momofuku would've been able to seat us, so I wasn't too unhappy. 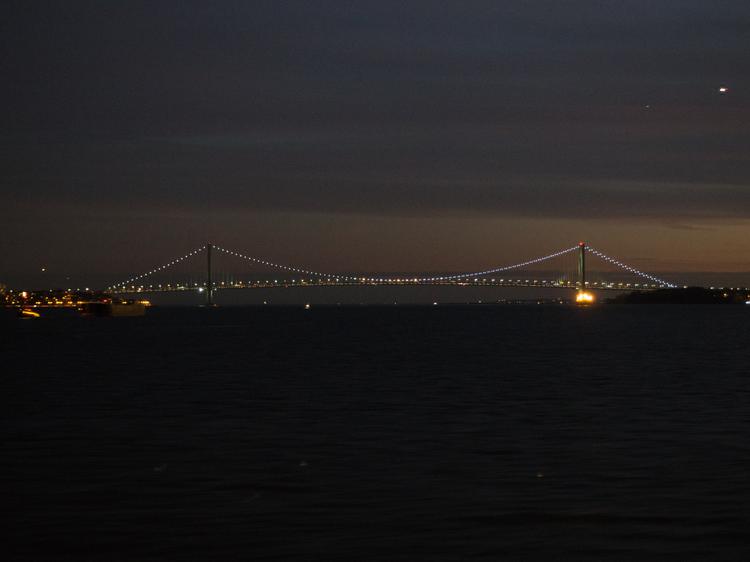 One thing I have definitely noticed in the past few days is "holiday fatigue". I'm definitely not feeling homesick, but at the same time I'm kinda ready to go home. After 3 weeks of being on holiday, especially with such a long list of places to see, to eat, and to enjoy, I'm ready for a comfy chair, some home-cooked food, and some trashy television. And no hotel breakfast to wake up to. I realise this sounds like the most privileged kind of whining - "Oh no, I've got too much awesome to handle" - but it can be really taxing, taking in all these new sights and experiences, and constantly planning out the next day/week so that you "don't miss anything". It's especially draining when you have a day where all the things you've planned seem to fall by the wayside, so the whole day feels like it's careening around randomly, and while it may have turned out excellently, it's just by fluke.

Anyway, it's near enough to home time, and there's still so much to do. I'm still a day behind in writing, but I have notes and I can always catch up on the plane.