It's been a busy 36 (or so) hours across two cities in two different continents. First a whirlwind stop in Zurich, and then finally reaching the US (about 2 years after our original plans).

warning: quite a few pictures in this one Our flight to Zurich was quick and uneventful. The airport is very bright and friendly (as we knew from our previous stop), and it was easy to just wander over to the train station, pick up our 24 hour Zurich card and hop on a train towards our hotel.

Ever since our (very) positive experience at Klaus K in Helsinki, Andy and I have always looked at "design" hotels. Often they are beyond our budget, but the 25 Hours Hotel Zurich West was quite reasonably priced (especially for Zurich). On the outside we were greeted by a very large lady. The interior of the hotel was quite funky, although we didn't see much beyond the lobby and our room. The room was spacious and the bed was ludicrously soft, something Andy took advantage of for a short nap while I indulged in a bit of English language TV (BBC World and Sky News). 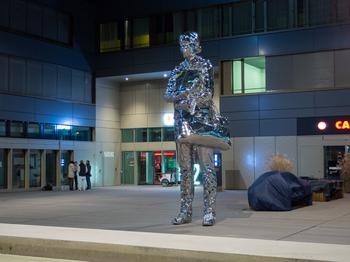 We eventually wandered out of the hotel and took a tram in to the centre of Zurich to the indoor Christmas markets at Zurich Hauptbanhof. This was quite crowded, but was fairly impressive, especially given that it's only regarded as the "second-best" Christmas markets in Zurich. To fight off the chill, I found myself drinking mulled wine with a shot of vodka. To fight of hunger, I acquired a plate of melted cheese, notionally served with on a bed of potatoes and some pickles for crunch. Unfortunately, there was nothing that could fight off Zurich prices. I thought it was just market stall inflation, but no, all the shops we went through were similar. 4 CHF for a bottle of water. 7 CHF for a mediocre medium-sized coffee. Add in conversion rates (~1.26 AUD to a Swiss Franc), and it makes Zurich a very expensive city. 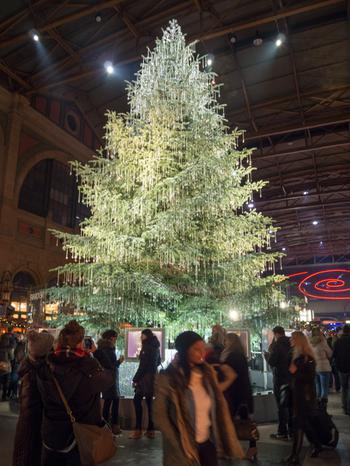 After eating, Andy and I wandered along the riverside to try to find the "real" Christmas markets in the Altstadt region of Zurich. Unfortunately they were closed by the time we found them, but we still enjoyed a very picturesque stroll along the river and amongst some of the old buildings. After an hour or so - walked out, tired out and getting cold - we hopped a tram back to our hotel and collapsed in to bed. 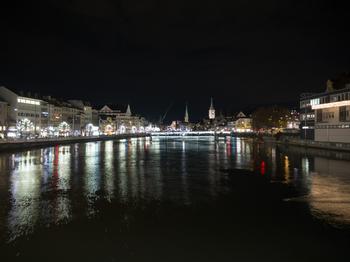 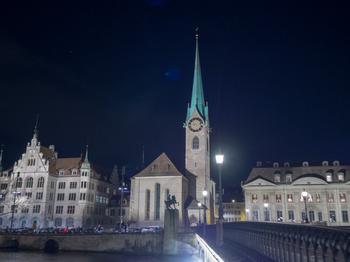 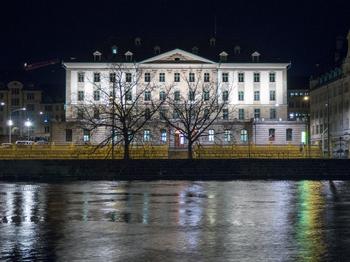 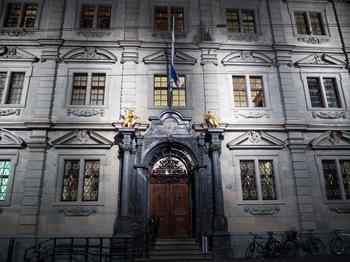 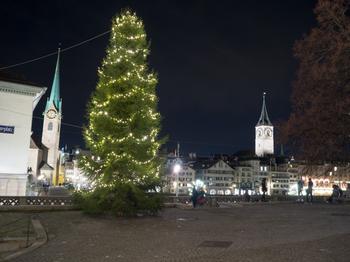 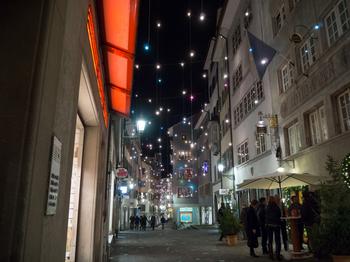 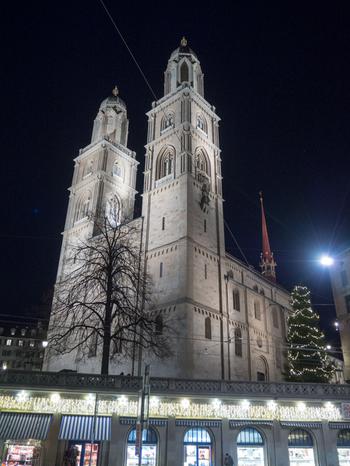 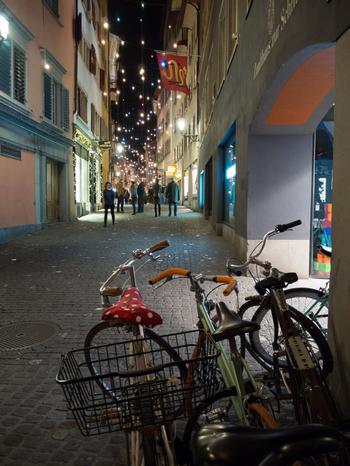 We had our first real sleep-in in the morning, enjoying not having any family obligations or expectations, and no fixed timetable other than being at the airport in time for a flight at 17:20. We eventually surfaced for food and a desire to see at least some of Zurich by day before flying out in the afternoon.

In the morning light, Zurich West really reminded both Andy and I of Canberra. All of the streets were very wide, and were well planned with ample space for public transport, pedestrians and cyclists as well as cars. There's even a giant communications tower on a hill overlooking the city. 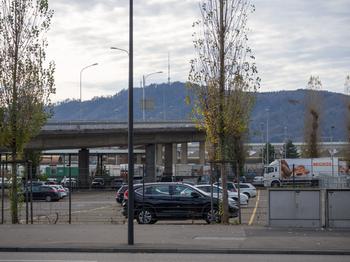 Andy had done a bit of research, and it was one train to the top of said hill - Uetliberg - with a few options along the way to get off and hike up. We decided to walk from Triemli station, which is about 3km from the summit, and about a 350m ascent.

It was about 1km in to the climb where we started to question the wisdom of having our backpacks with us. Having our overnight kit, plus airplane carry-on luggage, plus things too valuable for checked baggage made for a decent load on our backs. The walk was well worth it though, winding through a pine forest on a wide and well-maintained trail. 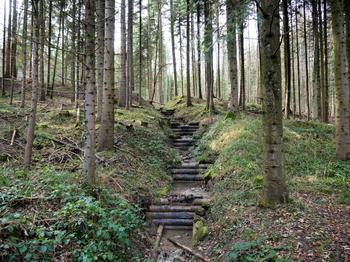 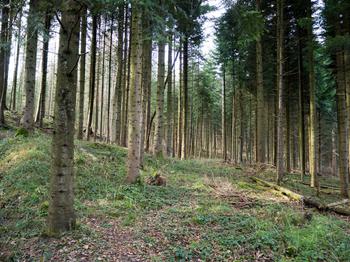 Of particular interest (to me) was the downhill mountain bike course running parallel to the walking track. There were some very cool back-and-forth berms, and some long stretches of wooden bridges. I think I may have said "fucking awesome" quite a few times. We saw a few cyclists coming down and riding up the walking trail as we were climbing, and once we got to the top, we saw that quite a few more cyclists were up the top ready to use the trail in all its glory. There was also a 3.1km sled track signposted from Uetliberg as well. This is definitely on the list of places to return to. 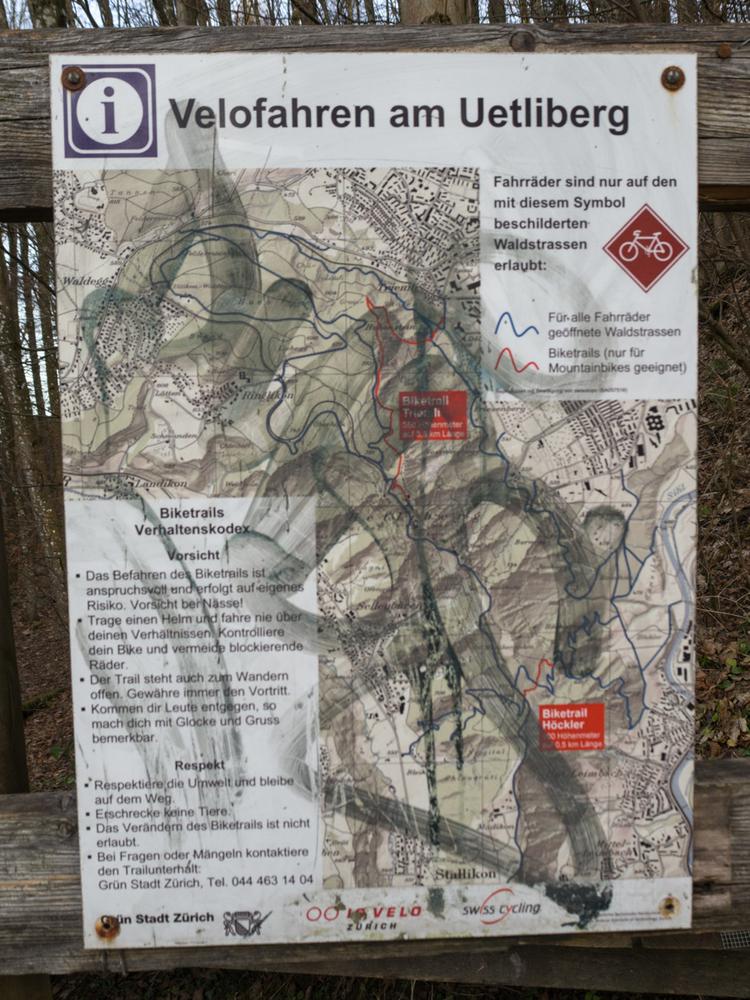 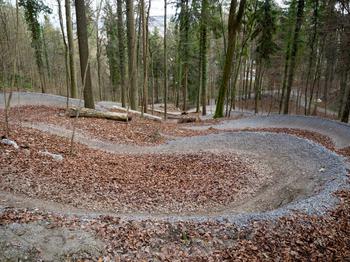 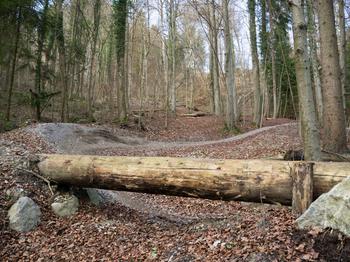 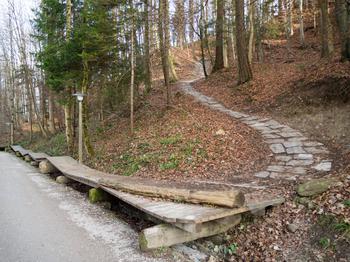 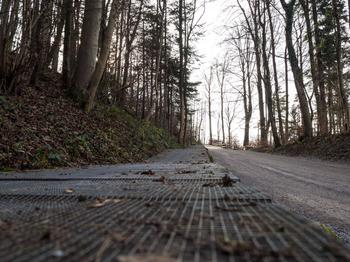 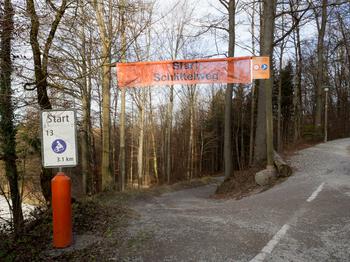 At the summit we took a few more stairs to climb the viewing platform. Well worth it! From there we had panoramic views across the whole of Zurich, the lake, and the alps. 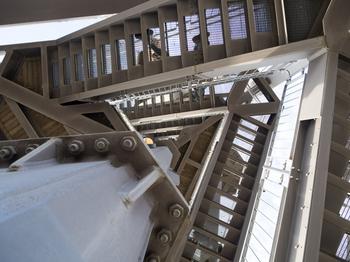 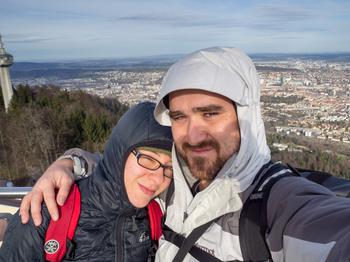 Well and truly awed, and sufficiently exercised, we caught the train back in to town in an attempt to get to the Kunsthaus museum. We made it there (no thanks to some "creative navigation" on my part), but we didn't actually have enough time to go through any of the collection. We made a quick exit through the gift shop, and headed back to Hauptbanhof to catch a train out to the airport.

On the train, we had our first encounter with a Swiss ticket inspector, who asked us why we hadn't validated our tickets. Turns out, buying a 24 hour Zurich Pass from a vending at a train station doesn't actually "start the clock" as I had assumed, despite the date being printed on it. We had looked around for some kind of ticket barrier or reader on our journey in, but finding nothing we had assumed our obligation was fulfilled after purchase. We were wrong. Thankfully, the inspector was fluent in English, understood our explanation and was very reasonable. He was happy to for us to surrender the (unvalidated) tickets, ride to the airport and leave with a stern warning and a better idea of the process next time. No harm done, but a bit of "excitement" for the pre-flight brain, to be sure.

Once through all the formalities we realised we still had a bit over 17 francs left in cash, so we did the only thing we could reasonably do: we bought 17 francs worth of fine chocolate from Sprüngli. That done, we settled down until boarding and said our farewells to Europe.

The flight from Zurich to Newark was not particularly remarkable, except in the challenge I set myself: Stay awake the entire flight, to try to accelerate my transition to US Eastern time. I was mostly successful, thanks to some tactical movie choices: Jurassic Park (still awesome) and Casino Royale (the Daniel Craig version; still good, but wow is the Bond-Vesper love story flimsy). I only had a minor doze, thanks to the most recent Godzilla, which held my interest for about 30 minutes before putting me to sleep for 45 minutes or so.

One thing the flight did confirm for me is that Swiss Air have excellent food and service, and really bad long-haul seats. I don't expect to come off a long flight feeling as though my buttocks have been caressed by angels, but the two long-haul legs on Swiss stand out in stark contrast to the SYD -> SIN leg on BA, and even the two short trips on Swiss between ZHR <-> OTP.

Once we landed in Newark, the fun waiting game began. All up it took just over an hour to clear passport control in EWR. There were 2 big planes arriving simultaneously from Europe, and this was split approximately 50/50 between the US Citizens and Aliens lines. What was ludicrous was that out of 55 lanes, only 6 were open to the public and of those, 4 were US-only. I guess I get the idea of churning through your won first (although one could make an argument for servicing international tourists preferentially), but what was incredibly frustrating was when the US line emptied and 2 of the officers promptly shut up their lanes and left rather than help clear the (still lengthy) international line. It kinda made a mockery of the "We are the face of the nation" instpirational Customs and Border Protection posters displayed throughout the hall.

Once we finally got through and picked up our bags, we caught an airport shuttle to a building where we could catch a hotel shuttle. We had just missed the shuttle for our hotel, so we had another 30-odd minute wait. Not quite the experience we'd been planning on, with an evening arrival and an early(ish) morning departure the next day, but once we got to the hotel the service was prompt, super-friendly and we quickly prepped for the next morning and hit the sack.

It felt pretty good knowing that, finally, after years of desire, intent and one big plan that had to be scrapped, we were in the USA.