Okay, since this is the "first few posts" and all that, expect a lot of entries starting with backstory about myself:

I've been playing games for quite a long time. I don't tend to play a lot of games, but I tend to play a lot of the games I play. I tend to get fairly involved in franchises too, and follow through on sequels. I've always been caught up in the Halo universe, and I definitely get sucked in by the hype, but I didn't actually buy the game when it came out. I don't actually own an xbox 360 (the one in our house belongs to my housemate), and so it felt a little weird buying a game for someone else's console. But since he was in Melbourne at the time, I finally caved a few days after release and bought a copy of the limited edition tin. I played it a fair bit, even got in to xbox live and played a few games with mates online.

Then I went overseas, and after I got back, I started getting more and more into my other online gaming addiction (World of Warcraft, which I'm sure will come up in the future) and wasn't playing so much on the Xbox Live front. Halo 3 started to gather a bit of dust and my skills (such as they were) faded away.

Recently, WoW-fatigue and some circular coaxing amongst a small group of friends has pushed me and a few others into a frenzy of Halo 3 activity. We've started playing together as a team, and trying to build our skills up together in the team playlists. 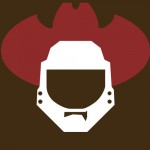 So if you find yourself on Xbox Live in either the Team Slayer or Team Doubles playlists of an evening, keep your eyes open for a combination of Dibbstar (myself), Enac Deraj, emslibbles or XingBot. Eventually you may even see Dievle as he builds up his skills and joins our team. Don't worry if you don't recognise the names, just keep your eyes open for the cowboy hats.

We're not going to be troubling the level 50 Generals any time soon, but we're working our way up, and winning our fair share of games as we go.