One of the things that I've started to use more and more lately is the Shortcuts app on iOS. This was a 3rd party app called "Workflow" a few years ago, but in 2018 Apple bought it out and introduced "Shortcuts" as part of iOS 12. The idea is that it introduces a bunch of different automations to iPad/iPhone, including integration with third-party apps that support it.

Since I just spent the morning playing around with various shortcuts and creating a few new ones to streamline my blogging workflow on the iPad, I thought I'd write up a few words on how I use it.

There are more words and subreddits about Shortcuts out there, so I'm really only going to talk about the stuff that I've been playing with.

I have 5 main use cases for shortcuts:

Of course there's the chaining of several of these things together - and that's where shortcuts really opens up some cool stuff, but at the same time, can be quite a frustrating tool to use.

In many ways shortcuts is a continuation of Apple's user-automation journey, building on the legacy of Hypercard, Applescript, and Automator as a simpler way of building up simple programs + scripts.

The entire interface is drag + drop actions, that allow some things to be passed between them, along with some basic flow-control actions like if, repeat, and choose from …, as well as actions for setting variables. This is great in that it's really easy to quickly pull together different pieces to build a shortcut, but it can be quite frustrating when you need to restructure your "code", like when you want to move a chain of actions to a different part of the workflow2.

One of the ways I try to mitigate this, and a pretty awesome feature of Shortcuts, is to build up individual shortcuts to do a specific task. For example, I have a shortcut called "📅 Schedule" which takes an (optional) date as the input, and then displays a summary of all the calendar items on the given day (or today if no date is provided). Sounds trivial, but what it means is that I can then have another simple shortcut called "📅 Tomorrow", which takes the current date, adds one day, and then calls "📅 Schedule" with tomorrow's date as the input. 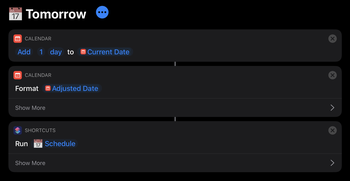 This then lets me build up nested workflows like "Master Control Program", which is a shortcut designed to live on my home screen, and give me 2-tap access to many different functions - all implemented as separate Shortcuts that get called based on a menu choice.

One cool action that both allows a lot more powerful workflows from the iPad / iPhone, but is also cheating a bit, is "Run Script over SSH". This is an Apple-provided action that does exactly what it says on the tin - you enter hostname, port, username and ssh key or password, and then a series of commands you want it to run. Bonus points - this also includes an interface for generating a new SSH key directly in Shortcuts, and then copying out the public key to configure your remote server. This turned out to be the final piece of the puzzle for my iPad blogging workflow - and has eliminated a "manual" step of connecting back to my mac mini at home (that "builds" the static site for the blog and uploads it), replacing it with the "RAMB: Deploy" shortcut.

So the shortcuts that I've either downloaded or written and use extensively?

And then there's the blogging shortcuts:

I'm sure there's some photo-management shortcuts in my future - I think that's the next thing I'll take a run at, and see if I can find a better workflow for sharing some of the myriad photos I've been taking of my son ...