Last night I had virtual drinks with a couple of mates - one from Sydney, and another who moved to Japan at the start of the year (what a time to change countries!). To make it feel a little different from the standard daily VC load, I rugged up and sat outside on the verandah instead, lounging in a comfy chair with a mosquito coil burning under me. The bottle of Shiraz Mataro helped too.

Just like the virtual breakfast the other day, it was really nice and it didn't at all feel like the video conferencing I've been doing for work. Sure, there's some common elements, but it really is a different thing altogether 1

But it spurred me to follow-through on some of the other virtual activities I've been bouncing around in my head - in this case, running a Dungeons and Dragons session over the long weekend. It's been a while since I last played (courtesy of both my son, and my regular collaborator/DM also having a kid).

So today I've pulled out the source books, and the dice, and started pulling together a mini-campaign. It's been a lot of fun, and I've even managed to get some story written, rather than just faffing about refining my selection of digital tools for managing the session. No spoilers - but I'll try to remember to put up some session notes here after Sunday. 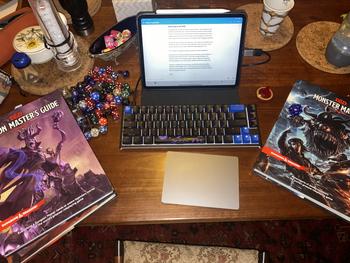