So recently I was talked into spending yet more money on headphones. This time it was primarily for my Xbox. I opted for the Astro A-40 Audio System, replete with Penny-Arcade Cardboard Tube Samurai tags. I also decided to get custom tags made up, with my "Cowboy" logo from my Halo 3 team. 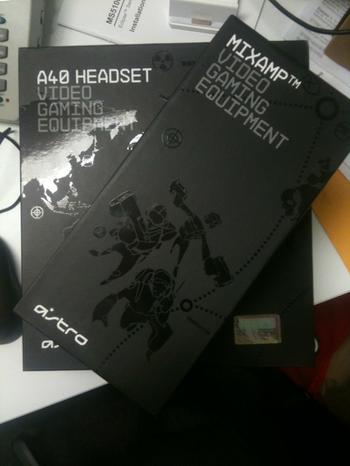 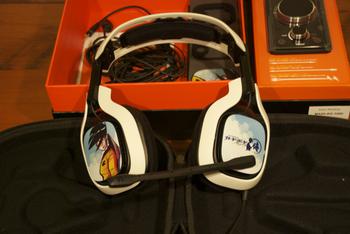 In use they are pretty amazing. They sound great, and the simple ability to have in-game sound and Xbox Live chat through the same headset is such a benefit. While I haven't really put the "Dolby Surround" part of the system through a serious test, the audio quality coming through is very, very nice and very detailed. Unfortunately it doesn't make me a better Halo player, just means I get a little more auditory warning before dying like a chump.

The biggest downside: cable spaghetti. Mini USB and TOSLINK optical from the back of my Xbox to the Mixamp. That I can deal with. But then I have a wire from the Mixamp to my headset (understandable, and plenty long enough) and a wire from the Mixamp to my Xbox controller for the chat integration. This is the single most frustrating thing of the entire system. Every cable that Astro supplies is ridiculously long, except the Mixamp-controller link, which is so frustrating. Because of this one cable, I have to basically take the Mixamp from next to the Xbox and have it on the floor/table within arms reach. Most annoying. But this was something I knew about before I bought it, and seemed a better alternative after reading some of the reviews of the wireless solutions.

In short, fairly expensive and, sure, maybe a little overpriced-stuff-white-gamers-like ... but I like them. A lot.

It seems to me that this election, more than any other, is generating a lot of "screw 'em both" noise. It's possible that this is just thanks to the miracle of the Internet, giving every opinion air (oh hai!), but it does seem like more and more people are disillusioned with the state of our two party system.

Ultimately, however, this election is a two horse race. When you get down to the electorate level, you end up with a mix of one and two horse races, with a very rare few seats where there are more than two candidates with any chance of winning. To many, this state of affairs seems to incite depression, especially since voting for a minor party is often seen as futile. The standard reply, which I wholeheartedly support, is that every vote counts. You only need to see the solid group of seats with a 2PP margin of <0.5% to see how crucial a small number of votes can be, and there's no reason to think that can't apply to minor parties as well. Thanks to full preferential voting, the outcome of a seat could change drastically based on the battle between second and third.

Take an imaginary seat that could well exist in inner city Sydney or Melbourne. This seat is typically Labor, by a comfortable margin over the Liberals, but has a high Green vote and sentiment.

Now, if the first preference counts knock the Greens out of the running, we have our "standard" situation where it is ALP vs LIB and the bulk of Green votes have ALP second and the 2PP takes its standard shape.

But consider for a minute that enough "protest votes" are cast to put the ALP and the Greens in the top two, and knock the Libs down to third. Such a circumstance would likely involve the ALP primary taking a large hit, potentially bringing it to the point where any Liberal voters that preferences the Greens above Labor could see the Greens take the seat.

Every election, at some point towards the end of the campaign, the major parties trot out the line "Don't risk a protest vote", for this exact reason. Given the high voter dissatisfaction with the two major parties, this election seems to be the perfect time to "risk it".

Yes, the "risk" is that there will not be a clear majority government, and this means that there might have to be some compromise, and some moderation of some of the crazy "policies" that have come out of this campaign. If you don't think the current two-party system is working, this is one way to shake it up a bit (if seats actually change hands).

This is a fairly specific and, at this election, rare scenario, however. If we step back and take a more cynical view towards the effect of protest votes, there's still a few handy benefits to voting for a minor party.

Firstly, there's the money. Each candidate who polls over 4% of the primary vote gets some coin for each vote they receive. Money is a necessity of campaigning and indeed running a political party (or any organisation), so "more" is often better.

Secondly, gradual change is generally easier to accept and sustain in the long term. In the seat of Sydney, for example, the Greens would require a swing of over 6% towards them to take second place over the Libs and have any chance at winning the seat. While it's possible, it would likely be seen as an aberration, and there would be a lot of pressure on the Greens to "perform" in order for them to keep those numbers at the next election. But a swing of 2-3% would not register as abnormal, but would serve to increase the credibility of the Greens at the next election. When trying to change the mindset of a large population, be it the almost 100,000 in an electorate or the over 20 million in the nation, the easiest way is to do it slowly. Even if your minor party vote doesn't help your chosen party win a seat this election, that party has now increased their legitimacy in the eyes of the electorate.

So if you're one of the many people disillusioned by the two major parties, and you see a glimmer of promise in a minor party, put them at the top of your list on Saturday.

p.s. On a slightly different note, remember that although you have to give a preference to every name on the ballot paper, your vote will never, ever get to whoever you put last - that is your one and only guaranteed "anti-vote".

So Australia has a new Prime Minister today in Julia Gillard. Much
like the NSW State Government, the process went something like this:

Just like in NSW, this situation is closely followed by cries of "We
didn't elect this Prime Minister". Julia Gillard even referenced this
herself in her press conference after her caucus installation.

This was then followed by the more politically educated talking about
the Westminster system, and how we vote for our local member / party
representative, and that the majority party chooses their leader, and
thus the PM, in their own fashion.

The problem with this argument is that it's only technically true.
This is how the system is designed and how, on occasions like this, it
works. But it is NOT how election campaigns are fought, and it's not
how the general public perceives the political system. It is a
lamentable lack of civic education, but like it or not, until the
political parties behave otherwise, or the general political education
level of voters is increased, it is how the system will be interpreted
in the mainstream.

Aiming to expand knowledge is an honourable cause. Informing people of
how the system is designed and (on paper) works, is a noble fight. But
throwing ones hands up in exasperation at all "we didn't elect Julia",
or berating Gillard for her up-front disarming of the issue, only
serves to vent and does little to change perceptions.

So next time someone complains about not having "elected our PM",
inform them of the actual system, but don't berate them for simply
learning by the example of the major parties.

Just a couple of quick things for (finally) getting the iPhone to recognise some of the more colourful words in the English language:

Finally, my iPhone can realise the glory of a correctly spelled fuck.

Props to user modular747 on the Apple Support forums for the (crazy) steps required for Edit User Dictionary.

I really should be throwing out old rubbish, but I find myself occasionally picking something up and looking at it.

Like this excerpt from a diary entry dated 5th of July, 2000:

My new computer is giving me the shits. Well, no, that’s not entirely true. The fact that the printer port isn’t working shits me because I can’t get my Zip drive to work, which means I can’t get stuff off zip disks onto my new computer. This would be fine if I could get the null modem connection between my new and old computers to work, but that isn’t working either, so at present the only thing that I can do to transfer documents is HyperTerminal, which is incredibly slow and dodge.