The past four days have been gloriously cyclicious. Yeah, I'm making up words. Drove down to Canberra on Friday arvo, had a night time introduction to Majura Pines singletrack, then had Saturday out in the shade of the Sparrow Hill singletrack circuit.

All in all, about 45km of singletrack riding and proof that I need a LOT of work if I'm going to survive The Mont 24hr race next year. Still, the course itself is not overly demanding in terms of skill, the main problem is just fitness.

The "off-hours" on the weekend were spent idling around Maladjusted "bicycle emporium" in Dickson, trying to decide which bike I was gonna buy as an upgrade for my 2008 Kona Dew Deluxe. In the end, after much consideration given to the Surly Cross Check, I decided I was going to get a 2009 model Kona Jake the Snake. It's a very well specced bike for the price, and a fairly popular bike amongst the staff at both my regular bike shops, which I take as a very good sign.

So, having been offered a fairly good price on Saturday arvo, but needing some time to think, I went to Mal's on Sunday morning, ready to fork over the credit card and load a shiny green machine into my car for the drove back to Sydney. As I walked in, the guy who had been serving me the day before spread his arms and have me a sheepishly apologetic look. The bike, MY bike, that had been on the shop floor unwanted for almost a year, had sold in the 4 intervening trading hours. I was gutted, but still managed to buy some consolation accessories.

So I drove back to Sydney, still quietly fuming, and held out hope that my Sydney regular shop still had 09 models in stock in my size.

Come the morning, I hopped on my DD for (hopefully) the last time and headed in to work early. I got in at 8:30, the same time City Bike Depot open, and gave them a call. The conversation was something like:

"Yes, last one, on display"

In the end they said $400 off retail, I said yes, they said 5pm, I cheered. Then went and had a shower, for I was smelly and had sore legs.

So in the afternoon I wandered down to CBD, picked upy shiny new bike, and rode it home. The total cost was $1960 including a luggage rack (an unsightly necessity). I think the ride home, after stripping pump and speedo off the DD, was worth about $1000 itself, so it's almost justified after a scant 12km. 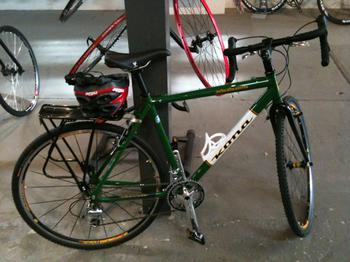 So now I have a more speed-oriented bike, with moderately specced road gearing, a ridiculous weight drop over my precious "commuter" and all the green goodness I could want between my legs. And to cap it off perfectly, my shiny new MTB shorts were waiting on my front porch when I got home. Granted, a bit late for Friday and Saturday's adventures, but they'll be getting plenty of wear in the next few months.

Now it's just ride, ride, ride and hope that somewhere between now and March 2010 I'm fit enough to not die on a hill, in a pine forest outside Queanbeyan.